Outside backs for World Cup seem to pick themselves 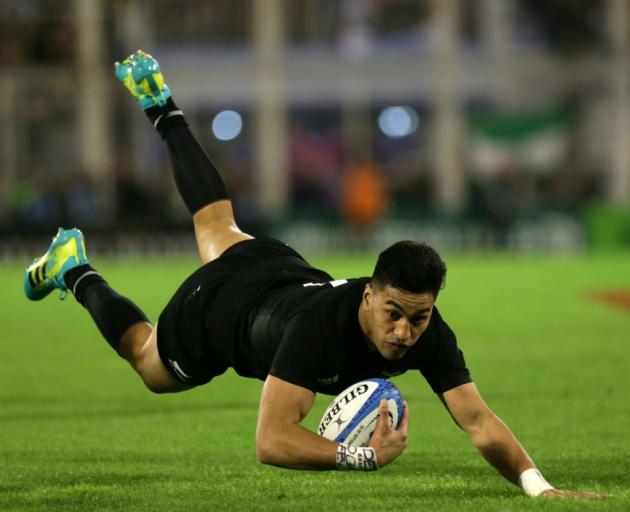 Rieko Ioane is a certainty to be on the plane to the World Cup. Photo: Getty Images
The World Cup is now less than 50 days away. The All Black squad to head to Japan will be named later this month. So what 31 players will travel to the Land of the Rising Sun to try to win the trophy for a third straight time?

When the All Blacks won the World Cup in 2015, Nehe Milner-Skudder came from the back of the pack to be a star.

That is a trend - John Kirwan, Jonah Lomu, Israel Dagg and Joe Rokocoko have all been outside backs who have made big and unexpected splashes at the World Cup.

So which outside back wearing a black jersey will be the one to watch this time around?

There are plenty of candidates for those positions and that is not a surprise. The way the game is played in New Zealand, outside backs get plenty of chances to shine.

But they can only take so many and plenty will be left behind. At a pinch they will take five.

Beauden Barrett may play at fullback but he is really a first five-eighth being played in the position for the two playmakers theory.

You can write down Rieko Ioane and Ben Smith as certainties.

Ioane looked out of sorts in the test against South Africa but it is rare for him to have a bad game. He has been a real star for the side in the past couple of years and will be on the left wing for the All Blacks for the key games.

Smith is in the veteran stages for a winger and fullback but shows no sign of slowing down and his consistency and experience will have him inked in on the selectors' sheet.

Jordie Barrett will join him. The younger Barrett has dynamism, possesses a good turn of speed and is big enough to make his presence felt.

But he can also cough up plenty of mistakes. He lacks some of those little touches which can make a player so much better. There is a lack of consistency within his game.

But he is not helped by not playing in one position for any length of time - not only for the All Blacks but any side for which he turns out. Versatility can help selection but it can also hinder players from fine-tuning skills.

Braydon Ennor looks likely to jump on the plane to Japan. He knows his way to the tryline and has plenty of speed. A guy with good acceleration, he has not looked back over the past couple of years.

There is only one place left and Sevu Reece will probably complete his rags-to-riches story by making the squad.

He is an electric runner and scores tries from all sorts of places. But question marks remain about his defence and his hands. The upside, though, is too good to ignore.

Highlanders winger Waisake Naholo is unlucky but he had a bad patch and then suffered an injury at just the wrong time.

He had no chance to stake a claim, as he could not play for New Zealand Maori.

Others such as David Havili, George Bridge and Matt Duffie are good, but not good enough.

Personally I'd say Beauden is a 15 playing at 10, his game management is relatively poor and he looks far more composed at the back with space to work with his vision and speed. Mo'unga, while lacking Barrett's sheer pace, looks far more comfortable against the rushed defence we're sure to encounter. Though he is very inexperienced which I'm sure counts against him.

Would also be annoyed if they take Jordie, wonderful physical talent but makes so many mistakes, is it worth the risk in a World Cup setting where he will be targeted mercilessly?