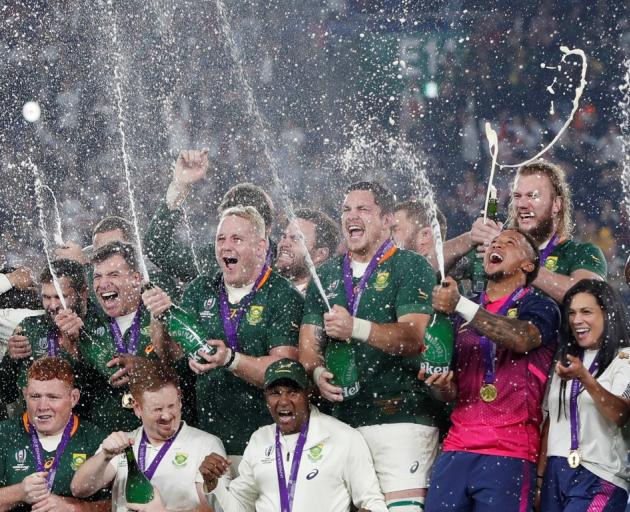 The South African team celebrate their victory in the World Cup final. Photo: Reuters
So it is all over for another four years. The World Cup threw up the usual surprises and the most predictable. Rugby writer Steve Hepburn looks back at the tournament.

A, Ardie Savea - who continued to play well and got round the field. The goggles were a complete side issue.

C, Canada - has fallen significantly. Never got near winning a game.

D, Drawn out - games go for two hours now, halftime is 15 minutes, 10 medics appear to run on to the field when someone gets injured, referees want every camera angle on any hint of foul play.

E, Eddie Jones - English coach who one week was a mastermind then the next week was on the verge of quitting.

G, Gourdie - Andrew, reporter who asked a question and it somehow blew up into a national incident.

H Hagibis - the typhoon which caused matches - rightly or wrongly - to be cancelled.

I, Intelligence - as per usual, the spying claims came out. More about nothing.

K, Kolisi - Siya, a good captain for the Springboks but probably not deserving of his starting place.

L, Liam Squire - was he missed by the All Blacks? Perhaps.

M, Michael Cheika - larger-than-life Australian coach who actually talked a lot of sense but got offside with the wrong people.

N, Non stories - there were a ton of them. With sometimes two weeks between matches and a 24-hour news cycle, there was plenty of cyber space to fill. Is there any person in the northern hemisphere who has not made a comment about the haka?

O, Owens - Nigel, still the best referee in the world.

P, Pollard - Handre, kicked the goals when it mattered.

Q Quirky - we all enjoyed the bows by the teams at the end of every game.

R, Richie - his shadow still fell over the All Blacks. Should there not be a limit on past players appearing at these tournaments?

S, Spark - was on a hiding to nothing with its coverage. With the lowest bar being absolute perfection, was always going to struggle.

T, Tattoos - weren't they supposed to be banned or covered up? Another non-story.

U, Underwhelming - performances that came from Scotland or Fiji could have been better.

V, Victory - the win by Uruguay over Fiji. That was one to remember.

W Worst - game: plenty to pick from. Wales-South Africa semifinal was a stinker. Player: is it the end of the road for Johnny Sexton? Coach: Gregor Townsend may be on thin ice

X, X factor - is still vital in the game despite the forward domination of many teams.

Y, Yawn - A two-hour buildup to a semifinal? Too much, really.

Z, Zero - the chances of getting a new All Black coach quickly and with little speculation.