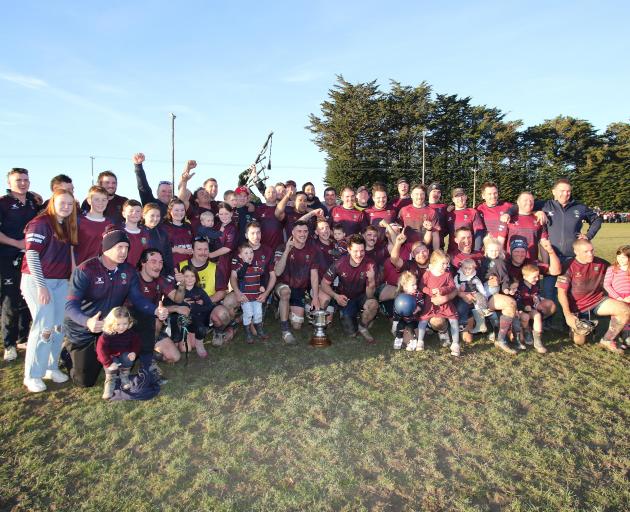 Members of the winning Clutha Valley team invited their children in for a celebratory photo after their 37-22 win over West Taieri in the Southern Region final at Clydevale on Saturday. PHOTO: JOHN COSGROVE
The Countrywide final at Clydevale this weekend will feature two of the more dominant sides in Otago Country rugby for the past few seasons, Clutha Valley and Cromwell.

Clutha Valley will host the final this season due to Covid-19 scuppering the Southern Region’s hosting it last season.

Valley has been unbeaten in this campaign and its last loss was in the 2020 final, to West Taieri. Valley got its revenge at the weekend, dominating West Taieri in the second half to take its place in its first Countrywide final since 2012.

Valley is celebrating its centenary this year and has had the benefit of a large squad to pick from throughout the season, plus some handy off-season signings.

Lachie Moore’s return has been a massive boost for Valley this season. He has 17 tries to his name and is one shy of bringing up 100 points for the season.

Thomas Johnson’s signing from Zingari-Richmond has been fantastic for Valley. His tee kicking, especially, has been on point for most of the year. His combination with halfback Jared Edwards has been top notch. Valley’s forwards have been led well by co-captains Reid Benge and Jordan Willocks.

Loosies Liam Turnbull, Maurice Tairua and Damian Wilson have been top-drawer this season.

Cromwell has clocked Central Otago rugby for the second season in a row. Cromwell was unbeaten yet again this season, taking its unbeaten streak to 19 games — back to the start of 2020 season. Cromwell played only 10 matches this season but racked up 341 points and conceded just 128.

Cromwell showed its grit and determination in the Central Otago final, when it edged Upper Clutha by a single point, with a strong defensive effort in the second half. Cromwell’s pack has been served well by front-rowers Alex Chubb and Jackson Clark. Both had stellar seasons.

Clark received Cromwell’s Player of the Year. Chubb was chosen man of the match in the final. Loose forward Daniel Hurring had another outstanding season for Cromwell.

Hurring has played with a niggle since the Topp Cup loss to Southern and showed how much ticker he has by finishing as Cromwell’s top try scorer with seven.

Skipper Ben Maxwell has been another stand-out performer and topped the Central points scoring charts with 110, which is impressive in just 10 matches.

This should be a very even match. Valley may have a slight edge with home ground advantage.

Cromwell will come into the match refreshed after a fortnight off and will be very keen to get the Countrywide shield back in Central for the first time since 2012.

Clutha Valley was on the losing end of the fixture that year. Will we see a repeat at Clydevale this year?