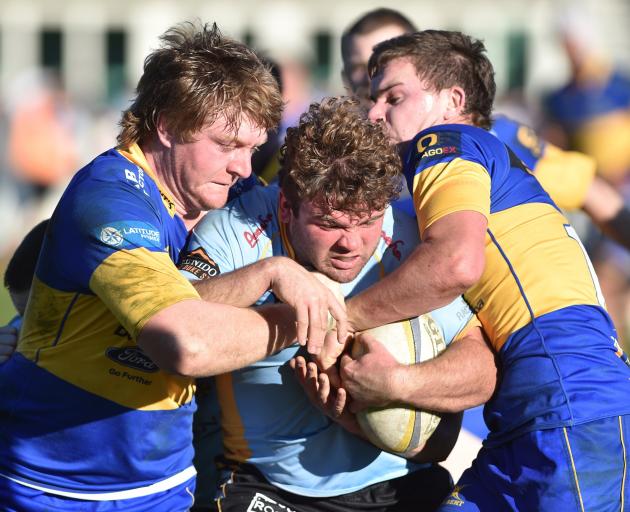 University No 8 Luke Russell tries to force his way past Taieri’s Nick Henderson (left) and Brayden Laing during a Dunedin premier semifinal at the University Oval on Saturday. PHOTO GREGOR RICHARDSON
Taieri is sneaky — sneaky good, that is.

The defending champion has hit form at the right time and may even start as favourite in tomorrow’s Dunedin premier club final against Green Island at Forsyth Barr Stadium.

The Eels certainly have more big-game experience than their opponents.

Since 2011, they have collected four titles, been runners-up three times and were beaten semifinalists in 2018.

That is a remarkable achievement and made even more astonishing when it is considered the club spent eight years in the wilderness.

It dropped out of the premier grade in 2001 and returned in 2009, after it beat University B in the promotion-relegation match the previous year.

Green Island has had a mortgage on the Cinderella narrative in recent seasons. That is down to the Grizzlies’ transformation from plebs to royals.

It was not that long ago they were conceding cricket scores.

Green Island ended a 17-year playoff drought in 2019 but slipped back down the order last season.

This year it has been the form team and has looked more than capable of claiming its first title since 1978.

But Taieri’s story is every bit as compelling. Its senior ranks dropped to just two teams and the club even flirted with the idea of merging with Green Island around 2002 and 2003.

Taieri club captain Mike Casey was not involved in the amalgamation talks, which ultimately broke down, but he remembers the moribund feeling around the club at the time.

"It was pretty tough being out of the top flight and we never want that to happen again," Casey said.

"But you’ve got to keep working at it because it can happen again and quite quickly.

"We’re bloody proud of what we’ve been able to achieve and this is going to be a hell of a final.

"It is a dream final.

"It is funny because I said to [Green Island coach] Dean Moeahu this feels very much like 2011 and how it felt like for us. The whole community is on board.

That said, Casey is "quietly confident" Taieri will emerge victorious.

"We are a really good team but probably don’t have the X-factor stars.

"We might have a few on the rise in Leroy Ferguson and Cameron Millar.

"But what makes us strong is we don’t rely on two or three guys.

"I’ve got great respect for Green Island, and they’ve beaten us twice this year, but I think we’ve hit form at the right time.

"Our last couple of performances have been really, really good. We’ve got everyone back on deck now.

"I’m quietly confident but you can’t be too confident."