By Adrian Seconi
0 Comments
The Highlanders will not lack for motivation this weekend.

For a start, coach Tony Brown gave his side a serve in a post match interview following the disappointing 32-20 loss to the Waratahs.

That loss left the team vulnerable to slipping out of the playoffs, which will have lit a fire as well.

If the Highlanders can beat the Rebels in Melbourne tomorrow then a quarterfinal showdown with the Blues awaits.

But the Force can snatch that spot away if they beat the Hurricanes and the Highlanders lose.

Fortunately for the Highlanders, they play last this weekend, so they will know the result of the Force-Hurricanes game before taking the field.

That is an advantage, but the Highlanders will go into the Rebels’ game with a rejigged backline.

Sam Gilbert is suspended and Mitch Hunt and Connor Garden-Bachop are sidelined with concussion symptoms.

That means veteran Marty Banks will start at first five, Liam Coombes-Fabling will slot in at fullback and midfielder Fetuli Paea will fill-in on the right wing.

The Highlanders’ preparation for the game against the Waratahs last weekend was disrupted by some late changes due to illness and injury.

While that was a mitigating factor in the below par performance, co-captain James Lentjes acknowledged his side had not got its preparation right. 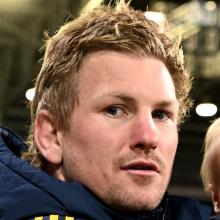 James Lentjes
"We didn’t get our week right last week for a number of reasons," Lentjes said.

"The main thing was that individually we weren't all good to go last weekend, and it showed in our performance."

A win against the Waratahs would have cemented a playoff spot. With that safety net removed, the Highlanders have had more edge this week.

"There’s been a wee bit going on off the ball. It’s been good to see. The boys are pretty keen."

Lentjes said the Rebels will be a dangerous opponent as they have nothing to lose and can play with more freedom. But he is confident in the game plan.

Banks had a similar take to Lentjes.

"The boys are pretty aware that we didn't probably perform to the standard we wanted to [against the Waratahs]," Banks said.

"We are well aware of that as a group. We had a pretty honest chat first day [back at training].

"So, now it’s on us. We didn't really need a spray from the coaches because we sort of knew we hadn't performed."

Banks said the game plan was to meet the Rebels physically and from there his role was to get the ball wide to the likes of Thomas Umaga-Jensen and Josh Timu.

Umaga-Jensen has been tough to stop and Timu is a bit quicker on his feet.

But do not be surprised if he uses his kicking game to play the game in the Rebels’ half. The Highlanders have weaponised their lineout, the scrum has been decent and their strength has been in their pack rather than out wide.