Individual brilliance from first five-eighth Levi Emery either side of the break set Alhambra-Union up for a 23-16 victory at Miller Park.

Despite an indifferent showing from its forward pack, the Alhambra-Union backs put points on the board and exposed weaknesses in the Green Island midfield.

Fullback Noah Cooper was first to benefit, after wing Pecili Malanicagi eluded a string of would-be defenders before passing infield for Cooper to score out wide.

Green Island bounced back, dominating through its forward pack and, when the first of two yellow cards was handed to out to Alhambra-Union players, the home team struck back through a try to No8 Josh Hayward.

But minutes later Emery burst through the Green Island midfield for 60m run to score under the posts and give his side a handy 15-8 lead at the break. He mirrored that try with another in the opening minutes of the second spell.

The match then ebbed and flowed with Alhambra-Union getting the equal of the Green Island pack but unable add to its score because of a high error rate and an improved defensive pattern from the home side. The mounting penalty count against it led to Jesse Va’afusuaga scoring for the home side, while a second yellow card to the visitors gave Green Island a bonus point.

Taieri had an experience edge and it made it count in tight tussle with University at Peter Johnstone Park.

Its 16-13 victory, though, looked like disappearing in the final moments as the students surged towards the line. But, as the young University side did so often during the game, it came up with a crucial error.

This time the team infringed at the breakdown and centre Matt Whaanga booted the ball into touch to seal the win.

Taieri, which led 6-3 at the break, had a tad more composure in the big moments and its kicking game paid dividends.

The Eels’ only try came from a pin-point kick pass which found Taine Craig-Ranga out on the left flank.

University fullback Taylor Haugh, who had a quiet game, closed in quickly and made the tackle. But Craig-Ranga got the pass inside to William Ngatai and he scored.

Midway through the second spell Taieri led 16-6. Both sets of loose forwards had had a busy day tackling everything in sight.

But gradually University clawed its way back. Replacement prop Carlos Policarpio made a difference when he came on.

A couple of powerful charges by hooker Ricky Jackson got University into a position to strike. Policarpio crashed over to set up an tense final 10 minutes.

Taieri, though, proved tenacious on defence and held out for the win. 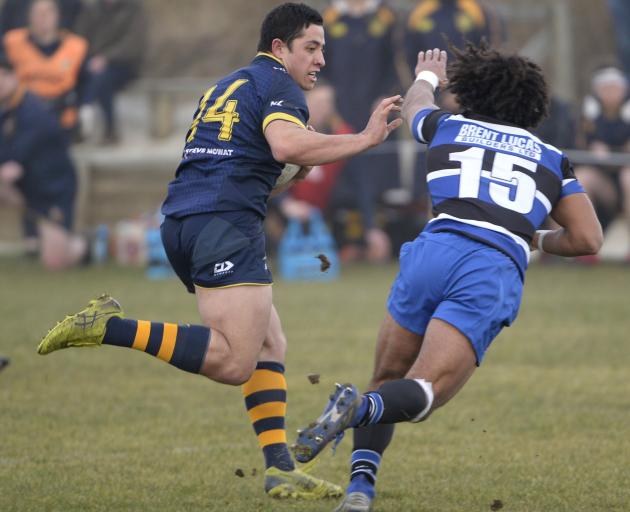 Dunedin wing Freedom Vahaakolo gets past Kaikorai fullback Roman Blackman on his way to scoring a 50m try against Kaikorai at Kettle Park on Saturday.PHOTOS: GERARD O’BRIEN
Kaikorai 31 Dunedin 26

As a game it never reached any great heights but the Kaikorai forward pack dominated the middle stages of the match at Kettle Park, doing enough for the visitor to win convincingly.

Dunedin looked the more dangerous out wide and Freedom Vahaakolo underlined his devastating finishing when he made a midfield break on halfway, beat three players with an outside swerve and dashed away. Then Irish lock Jack Regan went over from a lineout drive after 25 minutes for a 13-3 lead and things looked good for Dunedin.

Kaik started to exert forward dominance, especially at scrum time, and after sustained pressure flanker Slade McDowell went over to reduce the lead to six at the break.

Kaik took complete control in the first 25 minutes of the second spell.

The pack had the Dunedin scrum in reverse and it gave up numerous penalties and eventually lost prop Kees Scott to the bin. The floodgates opened and replacement hooker Mitch Pride took full advantage with two tries. Ben Miller put midfielder George Thomas through the hole and the lead had blown out 31-16 and the game was over.

Dunedin came back late with a converted try to replacement winger Oscar Uili-Schmidt. Replacement pivot Riley Forbes kicked a late penalty to give the Sharks a bonus point.

Kaikorai’s best were props Jonah Aiona and Sef Fa’agase, as its scrum won the game.

Imposing midfielder Keenan Christian-Goss was Dunedin’s best with his powerful running and tackling.

Neither side could convert territory into points at Montecillo.

It took until the last play of the game for Habour to be sure of the win over Zingari Richmond.

Harbour made two trips to the attacking zone in the first half and came away with points both times. Lisala Halaleva picked up a kick-off and waltzed over to score while Highlanders prop Conan O’Donnell drove over the line to score at the end of the first quarter.

Zingari-Richmond had a long period on attack in the
second quarter and was rewarded when big prop Sosefo Moniati went over.

Harbour midfielder Ewan Brumwell scored midway through the second half, as the home team ran out of defenders. But Harbour’s lineout went off the boil and Zingari got back into the game with a couple of penalties.

But its Achilles heel over the past few years — the ability to make crucial mistakes at just the wrong time — came back to haunt it and it could not get ahead.

Replacement halfback Alan Bennie scored to seal the win for the visiting side. Oliver Parkinson and Brumwell were solid for Harbour while Moniati, hooker Jacob Turell and No8 Aron Einarsson worked hard for the home team.