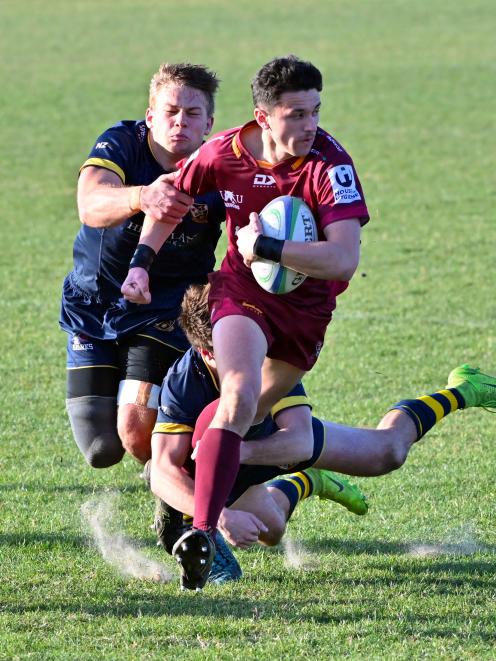 Alhambra-Union's Levi Emery is tackled by Dunedin players Owen Hundt and George Witana in a 'battle of the desperates' last weekend .PHOTO: LINDA ROBERTSON
The Wrap and the Final Spot

Southern despatched Zingers in a "dance of the desperates", with both sides racking up the tries in a game of touch. Taieri is sniffing at top spot and a home semi after hanging on against a slightly understrength Harbour outfit out at the Elver Pit. Varsity surprisingly only beat Kaik by a point to go top of the comp. The two points Kaik picked up kept its season alive, but only just, as it reaches for a defibrillator. The Sharks comfortably accounted for AU by 30 plus in the other "dance of the desperates".

So where does that leave us? Well, Varsity, Harbour and Taieri are in the four, with the final placing still to be determined. The equation for GI is simple - if it beats Dunedin this weekend it makes the four. Kaik has Zingari, so you would think five points is mandatory. But bottom line is it's in Green Island's hands. You think it would be done and dusted, with GI on 51 points and Dunedin in the mist on 27. GI is at home with everything to play for. The sideline Spannerheads will be baying for Shark blood, so a lay down misere? Possibly not. Inspirational captain and No8 Dylan Nel will be playing for Otago, and key midfielder Ray Nu'u has disappeared to Southland. Dunedin is starting its strongest pack of the season as they return from injury and the backline is looking better. Then there is the Speight's Challenge Shield, which GI holds - this leads to a pot of gold to the team that holds it at regular season end, and Sharks can smell it. This will be a great encounter and a fantastic way to end the round robin comp. Too close to call - see you there!

If you thought the Prem Grade was enthralling, what about the Prem 2 comp? Varsity, on 55 points, is in the four and guaranteed to finish top with a round to go. Taieri, Eastern and Dunedin are all on 45 points and West Taieri is two points adrift on 43. To add to the excitement they are all playing each other this weekend, with the exception of Dunedin, which takes on GI, which is next in the comp on 38 points. What a great last round six - more next week.

So the Shield gets its first airing on Saturday in Wanaka, when Otago takes on Thames Valley. I was bemoaning the fact that the selection of the team could have an undue bearing on the outcome of the final four in the town comp, but hats off to Ben Herring - the Otago coach has minimised the disruption as much as possible. Varsity has six out and is the most disrupted, and Taieri three, and they play each other. Varsity will be breathing a sigh of relief that it is already confirmed one or two. GI and Kaik have lost one and two respectively, so should be OK. What is odd is Central Rugby is on at the same time as the shield game - that seems to me bizarrely crazy! Or is it just me? However, I digress; Ben has put a pretty good team on the paddock in trying circumstances, and it should comfortably account for Thames Valley. Congrats to Ben Morris, Ben Miller, Kilipata Lea, Saula Mau, Josh Hill, Kayne Hammington and Aleki Morris, who are all making their debuts for Otago - well deserved lads.

Lucky to salvage a draw with the "brains" behind this column, Kirsty Myhill, and on to president-for-life Des Smith of Otago Rugby, so victory is at hand. Taieri (12-) is less affected by the Otago team, and Varsity has lost its whole front row, so the Eels just. Kaik (13-), even with a couple of stars away, will be too strong for Zingari at the Cemetery. The Magpies (12-) should get it done over AU to end their season with two wins on the trot. GI at the Toolbox should get the four points and a semifinal, but I have a sneaking suspicion the Sharks (12-) will tip them up, much to their indignation and horror!

I said the world's funniest streaker (at World Cup Cricket) Ben Sandall was a Varsity prop, but deepest apologies - he was only a bit part player there, and his spiritual home was the Sharks - good on ya mate.