England motivated to do better this time 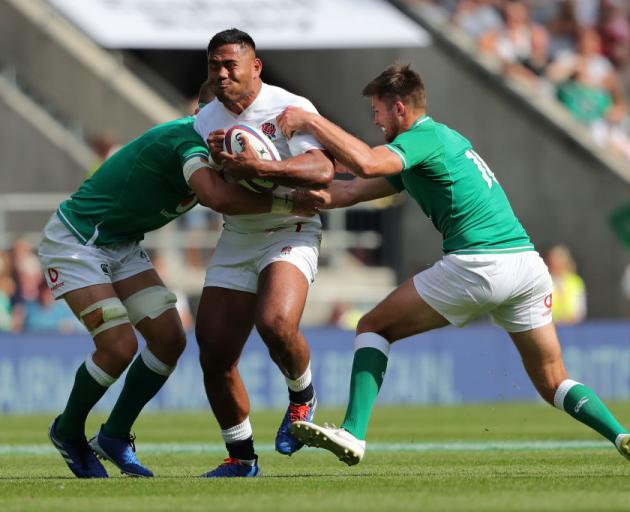 English midfield back Manu Tuilagi is tackled by Josh van der Flier (left) and Ross Byrne, of Ireland, in a match at Twickenham last month. PHOTO: GETTY IMAGES
The Otago Daily Times continues its look through the pools in the World Cup with a look at pool C, the "pool of death". Steve Hepburn rates the contenders.

The English should not struggle to get going this World Cup. Last time out on home soil, the side laid an absolute egg and did not get out of pool play, losing to Wales and Australia. So there is plenty of motivation to do better this time around.

Being away from home may help the side as its invasive home critics can quickly turn on the team.

England, though, will not have it any easier this time around. France and Argentina will pose considerable threats so the English will have to be on the ball.

Eddie Jones has come in and started with a hiss and a roar. The speed wobbles then started to set in and it has been a mixed bag over the past 18 months.

But the side has some real talent - a strong front row, quality locks and big, tough loose forwards.

The inside backs are not bad while there is some talent out wide.

Much will depend on the fitness of centre Manu Tuilagi and whether the pack can be disciplined enough to get on top.

Willi Heinz is an interesting selection but he is quick and offers a point of difference. If the tournament becomes a kicking festival and defence dominates, then England is in a good position.

Fact: There are more chickens than people in England.

The French have never been in a worse position entering a World Cup so they will probably make it to the final.

No-one really knows with the French. In 2011, they were fighting among themselves, not listening to the coach and losing to Tonga. They promptly made the final and almost won it.

The sport in France is dominated by club owners who hire the best players and do not overly care about the national team.

But it is a big sport there, especially in the south, and there are a lot of players to pick from.

But the side has only won 34 games out of the 89 played since losing that final in 2011. It got rid of coach Guy Nova in 2017, the first French coach to be sacked, and the side has looked lost at times.

The game has sped up but France still seems to be far behind. It has made the knockout stages in every tournament but may struggle to continue that record.

It has beaten the likes of Scotland and Italy but struggled to compete against England and Ireland.

France has brought back veteran loose forward Louis Picamoles for the tournament while midfield back Wesley Fonfana is still floating around.

Romain Ntamack and Antoine Dupont appear to be the future if the side wants to succeed.

Fact: The French invented the metric system, the decimal way of counting and weighing, in 1793.

The Pumas overachieved in England four years ago, making the top four, and will do well to get that result again.

The side has not had a lot of success this year and did not win a game in the Rugby Championship.

But playing in the intensity of this competition should do the side a power of good when it comes to the World Cup.

The side under coach Mario Ledesma has tried to play an all-round game while keeping to the tradition of having a tough forward pack and strong set piece.

The biggest issue is discipline. It has given away far too many penalties over the years and that continues to haunt it. Lock Tomas Lavanini is the worst example of this as he loses control of his aggression.

In a cut-throat tournament such as the World Cup, conceding penalties is a sure way to lose games.

The continuity of the team is strong and it will not lack combinations as most of the team play for the Jaguares.

It will welcome back first five-eighth Nicholas Sanchez and prop Juan Figallo to the side and they will bring experience.

Fact: The national side was originally known as the Jaguares but in the 1960s a South African journalist covering the side mistakenly called them the Pumas and the name stuck.

The United States has been making progress in recent years but is no chance to get out of pool play. But the side will be competitive and will give all sides a real examination.

The players have experience and the team has now pulled ahead of Canada in the battle of the North Americans.

The new league in the United States is building depth but a win against a major nation at a World Cup appears unlikely this time round.

Former Sharks coach Gary Gold is in charge and he has plenty of knowledge.

The United States has improved markedly at sevens but the 15s game is still a puzzle for many.

Hooker Joe Taufete'e is a quality player who plays in England, while captain Blaine Scully is a winger who knows what is going on there.

The United States beat Scotland last year but was still well beaten by a New Zealand Maori team which was not overly flash. Other sides such as Ireland have been too good.

The United States still lack that nous for the game and struggle to stay composed when under pressure. Not much is expected to change that department.

Fact: There is no official language in the United States.

Tonga will always be willing but after the thrashing by the All Blacks earlier this month the confidence in the camp will not be sky high.

The team has played not many matches since the last World Cup and the squad is full of players who appear to be past their peak.

Siate Piutau will captain the side from the midfield but he seemed old when he was at the Highlanders and that was seven years ago.

There are others who have connections with the Highlanders: props Sila Halanulonuka and Ma'afu Fia, winger Telusa Veainu and No 8 Nasi Manu.

Manu has made an amazing comeback from cancer and will be an inspiration for his side.

Cooper Vuna is a good winger and big prop Ben Tameifuna is a giant of a man, who is hard to move.

But things like fitness and nous win games at this level these days and one wonders if Tonga has enough of this.

Fact: Flying bats are sacred in Tonga and can not be harmed.