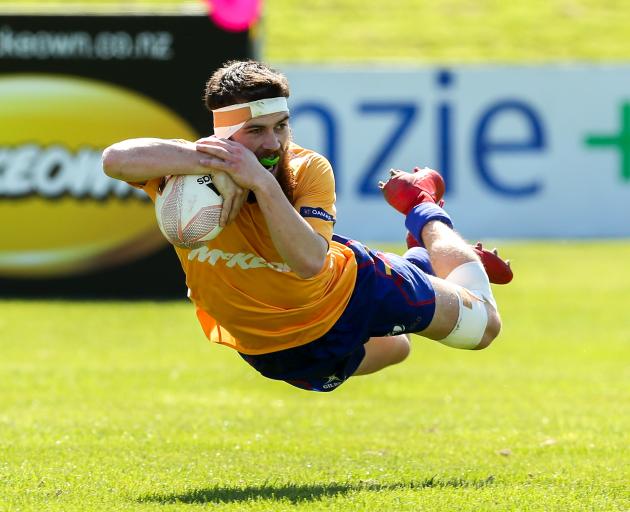 North Otago winger Adam Johnson dives over to score a try during the Meads Cup final against Wanganui at Whitestone Contracting Stadium in Oamaru on Saturday. Photo: Getty Images
North Otago is probably not feeling quite as bad as other parts of the country.

The All Blacks have bowed out of the World Cup but the Old Golds claimed the Meads Cup with a convincing 33-19 win over Wanganui in Oamaru, on Saturday.

The home side produced an utterly dominant opening 40 minutes in front of a crowd of about 1200.

It was made all the sweeter when veteran prop Ralph Darling potted a dropped goal towards the end of the first period.

But it was in the scrums and around the paddock where he made his most telling contributions.

"That could be Ralph's last game in the North Otago jersey and Lemi's [Masoe] as well. It was Robbie Smith's 50th game, so it was a huge occasion for those guys, and our manager [Duncan Kingan] who has been with us for 13 years, so we are sending them out on a good note."

Masoe made a telling break, and the midfielder ran his legs to a stop. Smith scored a critical try when Wanganui was threatening to make a comeback early in the second spell, so they both had fine games.

But really the game was won with No 1 through to No 22 just bringing more physicality than their opponents. The first half was not too bad, either.

"We knew we had to start well but in that first 40 minutes they really took it to them."

Wanganui fumbled shortly after the kick-off and North Otago was ruthless. It bashed it up until the visitors eventually cracked.

Who else was on hand to score but incredibly hardworking lock Charles Elton? He was never far from the ball and dived over.

Wanganui had an opportunity to reply but fullback Nick Harding missed a simple penalty from more or less in front.

He was in the spotlight again when he chipped the ball ahead as Wanganui looked to attack out of its own half.

But veteran centre Masoe gathered it, beat the tackle of Harding and scampered as far as his 38-year-old legs would carry him before passing inside to winger Adam Johnson, who scored.

Fellow winger Howard Packman also scored after exciting fullback Patrick Pati made a break. But the undisputed highlight was that dropped goal by Darling.

"Ha ha. Yeah, Ralph said he wanted to do it all week," Forrest said.

"No, it certainly wasn't in the plan. I don't know what he was thinking. It was off the cuff and that is how Ralph is. Hey, we got three points out of it."

North Otago went into the break ahead 25-7.

Darling and fellow prop Meli Kolinisau gave the home side so much go-forward. Elton was tireless and midfielder Taina Tamou made some impressive carries.

None of that commitment waned at any stage during the second spell.

Wanganui cut the gap early, when industrious openside Angus Middleton scored. But North Otago replied quickly through halfback Smith, who outplayed his opposite.