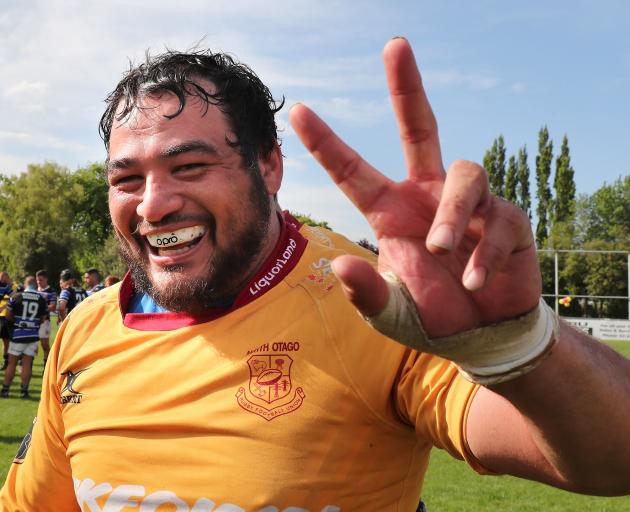 North Otago captain Ralph Darling celebrates after his side's win over Wanganui in the Meads Cup final at Whitestone Contracting Stadium in Oamaru on Saturday. PHOTO: GETTY IMAGES
Veteran North Otago prop Ralph Darling was already one of the most popular men in Oamaru.

But after nailing a dropped goal in the Meads Cup final win on Saturday, the loosehead has carved himself out a piece of folklore.

He will tell you he was "just standing there having a rest" when he got the ball about 20m out.

But instead of sticking his head down and charging forward like he had being doing so well, "I closed my eyes and hoped for the best".

The crowd of about 1200 erupted in an equal mix of unchecked joy and utter amazement.

His audacious effort just before the break saw his side go into the changing rooms up 25-7 against Wanganui. North Otago went on to win 33-19.

The 32-year-old was part of a dominant effort up front by the home team.

He ran like a young bull and scrummed like one as well. He was just tremendous value in his 109th match and probably last game for the Old Golds.

"I reckon it probably was," Darling responded.

"I'm getting a bit old now and the jerseys are getting tighter and tighter.

"There is some really good young boys coming through and they are only going to get better with the more footy they play."

Darling has helped collect three Meads Cup titles during his stint. He was part of the successful 2007 and 2010 campaign.

"We've been toiling away in the Lochore Cup for a few years and to get this far is pretty special. It has been a long time coming.

"I'm just so proud of the boys to put it together like that. It hasn't quite hit home yet," he said before receiving another cuddle from a supporter.

And that dropped goal?

"I don't know what was going on there. We'd called for the droppie but we got charged down. So I thought I'd drop into the pocket, we had nothing to lose.

"It was just one of those things. I hit it pretty good I think."