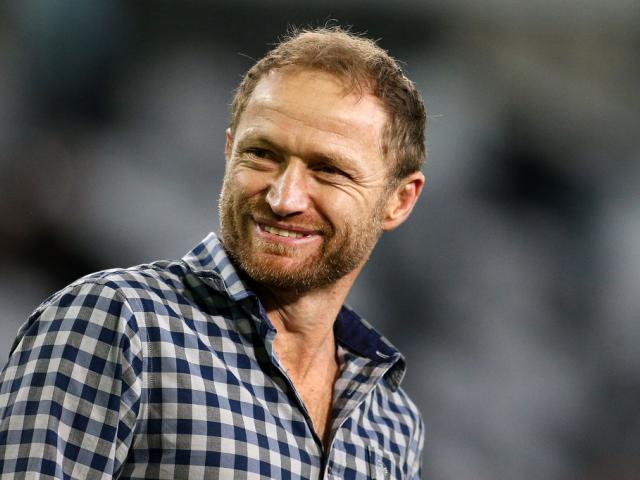 Tony Brown. Photo: Getty Images
The Highlanders are confident of having Tony Brown on board for the full season, irrespective of what happens in the All Blacks coaching ranks.

Brown is set to arrive back in Dunedin to help coach the Highlanders in November and head coach Aaron Mauger has assigned new roles to his coaching team for the 2020 season.

The side will welcome back Brown, who was involved in the Highlanders from 2014-17 before he headed to Japan.

There has been speculation he will be part of a new All Blacks coaching team for next year.

Reports indicated the two leading candidates for the head coaching role, Ian Foster and Scott Robertson, both want Brown to be involved with their coaching teams.

Mauger said Brown was busy with the Japanese World Cup campaign but had been keeping in touch with the Highlanders coaching staff.

He said if Brown was to join the All Blacks, then he would go with the best wishes of the Highlanders, but he would definitely be on board for the Highlanders for the 2020 season.

Mauger would be the head coach and would also look after the defence.

He said the role of a head coach had changed a lot over the past five years and there was a lot more off-the-field work to do.

''A lot of the work gets done now off the field and the job is most important in making sure everything is working well and you can create an environment where people can be as good as they can be,'' Mauger said.

Mauger said taking charge of defence was something he was looking forward to. It was not as complicated as attack, so he had time to dedicate to that facet of the game.

Glenn Delaney, the defence coach for the past two years, has moved to the Scarlets clubs in Wales.

Brown will be the attack coach and will also be in charge of the side's game strategy.

Clarke Dermody, who has been the scrum coach for the past few years, will have a more expanded role and work at the breakdown with forwards coach Mark Hammett.

After nine years, strength and conditioning coach Andrew Beardmore is moving on and he will be replaced by Simon Jones. Jones has been involved in teams in the South and is with Japan at the World Cup.

Mauger said he had finished the review of the 2019 season, in which the Highlanders were knocked out in the first week of the playoffs.

It had been a season of disappointment. He said there had been some challenges in the season, some which had been achieved and others that had been hard to overcome. Having 19 players return late in pre-season was difficult and took a while to iron out. That should not be an issue next season.

The side had started games well and was the best-performing team in the competition in the first half, but it had faded in games. Mauger said wanting to get the team bigger to take on big packs might have come at a cost later in games.

The side was due to announce further players but Mauger was excited about the talent on display at Mitre 10 Cup level.

Otago players had taken a real step up and getting Jona Nareki was a real asset.

The side was still looking round for a loose forward and a lock-loose forward. He declined to comment if the side was looking at former All Black Adam Thomson.