Josh Ioane is back with a new perspective.

He had 80 minutes at first five-eighth for the first time since last year on Sunday.

In fact, it was the first time he has played 80 minutes in any position since March.

The result — a 32-21 loss to the Blues at Forsyth Barr Stadium — was one with which he admitted the team was not happy.

But there are positives to take on a personal note.

He is enjoying being back in the No10 jersey. 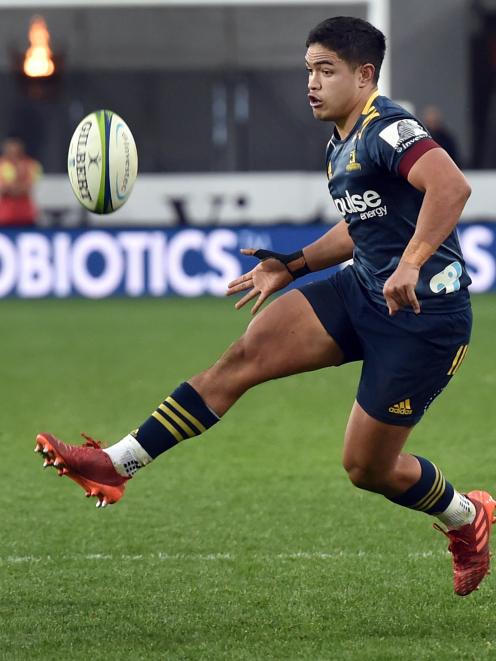 Highlanders’ first five-eighth Josh Ioane puts a kick through during the side’s game against the Blues at Forsyth Barr Stadium on Sunday. PHOTO: PETER MCINTOSH

His groin, which he injured in the last training before the Super Rugby Aotearoa restart, is feeling good as well.

The experiment to use him as a second five-eighth outside Mitch Hunt may have fallen flat.

But he takes new knowledge as he moves back into the position that propelled him into the All Blacks last year.

"Twelve definitely gave me a different perspective of the game," Ioane said.

"Coming back into 10 I’ve really asked a lot from our 12s, Patelesio [Tomkinson], just especially around communication and helping drive us around the paddock."

He said he enjoyed directing the team around the field, although felt it was good having Hunt at fullback to add another voice to the set-up.

Whether the move back would help his prospects of getting back into the All Blacks, he did not know.

His focus remained on playing well for the Highlanders.

Slotting back in after five weeks off was not easy and he admitted both his lungs and body were still adjusting.

However, he was looking forward to this Sunday’s match against the Crusaders in Christchurch.

A win would be enough to seal the Super Rugby Aotearoa title for the Crusaders.

They hold a two-point lead over the second-placed Blues, but a bye this week means the Blues have just one more game to play.

Ioane said the Highlanders had talked about their issues against the Blues and wanted to put in a better performance.

"We feel like we probably didn’t match their physicality.

"They were really good, especially up front, or across the board, actually.

"This week we’ll probably look to match that physical battle, that should help us."