Aaron Mauger
Highlanders coach Aaron Mauger said his side's failure to put the foot on the pedal cost it against a big and powerful Blues side.

Mauger said the match was stop-start and that took away some of what the team was trying to do against the Blues.

"We couldn't quite get our speed and our flow going tonight. It was slow ball in play, pretty stop-start and that did not help how we wanted to play and it went in the Blues favour," Mauger said.

"Their physical part of the game was really key for them. We just needed more speed and momentum in our game. When we did it, we did it well. But we just did not do it enough."

He paid credit to the power game of the Blues who he said were the best team in the competition when they get close to the opposition tryline.

The Blues had good tactics in slowing the ball down and there were many lineouts and scrums which also led to a slow game.

Mauger said the Blues’ big size helped but it was not everything in the game. 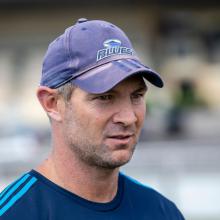 Barrett had done little training during the week but was determined to play. He had a big role in the team and was desperate to play and wear the No10 jersey, MacDonald said.

MacDonald praised his big forwards and said he knew the side would have to front against a hard-working Highlanders pack. The side had treated the game as a semifinal, as it was its second-last game of the season.

It has a bye this week.

A former Crusaders back, MacDonald said he would be cheering for the Highlanders this Sunday against the Crusaders.

If the Crusaders beat the Highlanders, they will win the Super Rugby Aotearoa competition.