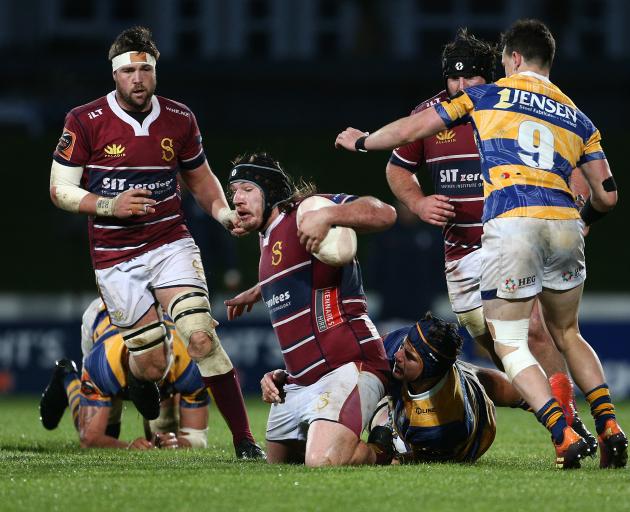 But a succeeder is ultimately more effective.

But endeavour and fire go only so far.

Being ruthless when the chances come along is the road to victory.

Southland gave its all in very trying conditions but came up short, going down 22-12 to Bay of Plenty in the home side's final game of the season.

Southland had its moments and was ahead 12-10 well into the second half, and had chances to pull further ahead.

But it could not crack the Bay of Plenty defence and slowly the side from the north turned the tables in what was a grinding contest.

Southland had led 12-5 at the break and was still in front with less than a quarter of the game left.

But Bay of Plenty put on a quick one-two punch with former Highlanders Te Aihe Toma and Tom Franklin scoring tries and the game was over.

Southland has made progress this year and with a couple of X-factor players could have bagged more than the one win this season.

That was again the story last night. The forwards toiled hard and its set piece was sound at times. In midfielders Ray Nu'u and Isaac Te Tamaki, Southland has a couple of lively backs.

But it just struggled to put it all together as the damp night made accuracy a vital ingredient.

Props Joe Walsh and Morgan Mitchell - in his 50th game for the province - were good contributors, while lock Mike McKee showed some nice touches.

However, it was not quite enough for the home team.

With the win Bay of Plenty went to the top of the championship table.

The first 20 minutes of the match will not linger long in the memory.

In difficult conditions - it was windy and raining throughout - the accuracy was not there from either team. Many of the kicks from general play went nowhere and too many were kicked out on the full.

Bay of Plenty slowly began to get on the front foot and eventually the first try came after 25 minutes.

After a big run by No8 Abaham Papali'i, the Bay side worked the ball forward towards the Southland line.

It then moved the ball to the right and found flanker Mitch Karpik unmarked on the outside and he scampered 20m to score.

The forwards ran the ball up and then off a ruck, lock McKee ran a good line and broke the defence. He threw a well-timed pass to flanker Matt James who ran 20m to score.

Marty McKenzie could not add the extras and missed a long-range penalty five minutes later.

Southland, though, took the lead right on halftime.

Southland midfielder Nu'u broke the line on the right and drew the last defender before charging hooker Greg Pleasants-Tate took the pass and went over.

McKenzie knocked over the difficult conversion to have the home side ahead at the break.