Crunch game for crunched Otago side 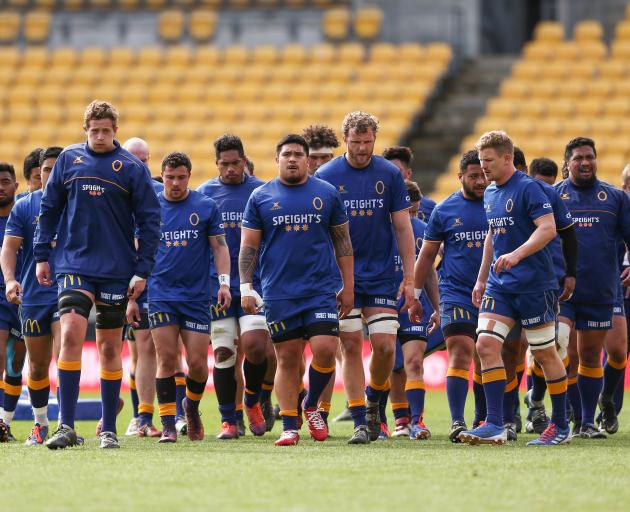 Otago are looking to bounce back after a humbling in the capital last week. Photo: Getty Images
Otago continues to shuffle its deck as it covers injuries with a crunch game against North Harbour looming tomorrow night.

The side is heading to North Harbour Stadium in what is shaping as a pivotal game for the side.

The team is sitting on a 50% win record, having won three of its six games.

But it is yet to win a game away from home, and was well off the pace in conceding a half-century to a rampant Wellington side in the capital last Sunday.

The team has made eight positional changes in its forward pack and hooker Nic Souchon will get a start.

Former North Harbour and Waikato player Steven Misa has been drafted into the squad and will make his debut off the bench.

Sekonaia Pole has an issue with his shoulder and is resting it this week.

Slade McDowall comes back into the side, as does No 8 Dylan Nel.

Adam Thomson was set to line up in the reserves, but he twisted his ankle at training yesterday. He was replaced in the reserves by Josh Timu. Originally Otago was going to have six forwards on the bench, but with the injury to Thomson it has reverted to the traditional four-three split.

Halfback Kayne Hammington has dislocated his big toe and has other niggles, so Connor McLeod, who made his first-class debut last week, will back up Rowan Gouws, who is also returning after a week off due to a blow to the knee.

Sio Tomkinson comes back into the team as Japanese international Harumichi Tatekewa has returned home.

Jona Nareki has a minor hamstring strain and is rested.

Henry Purdy will be on one wing with Vilimoni Koroi on the other. Skipper Michael Collins starts at fullback.

The side is eyeing a win over North Harbour, but it is not going to be easy against a side which ran competition heavyweight Tasman close last Sunday, losing to a penalty try in the final minutes.

Otago coach Ben Herring said it was a match the side was targeting. A win would set the side up nicely going into the final weeks of the season.

North Harbour was due to name its side today.