Rugby Park Stadium was sold out for the game. Photo: Peter McIntosh
The last time Otago and Southland clashed in a Ranfurly Shield match was in 2010. A train headed south to Invercargill, a crowd of 17,500 rocked up, and 80 minutes of high drama played out.

Rugby writer Steve Hepburn walks down memory lane, with the aid of some former players, as the two sides get ready to clash this Saturday for the log o’ wood.

Southland had won the shield in 2009 when it upset Canterbury 9-3 and held the trophy over the summer. Otago was the first big challenge the next year. Otago made a rough start to the season but journeyed south with plenty of determination.

Eben Joubert (Otago flanker): I managed to have an impact off the bench in our opening loss against Counties that year and the decision was made to go with two opensides against the Stags. I was so pumped to be given the opportunity. 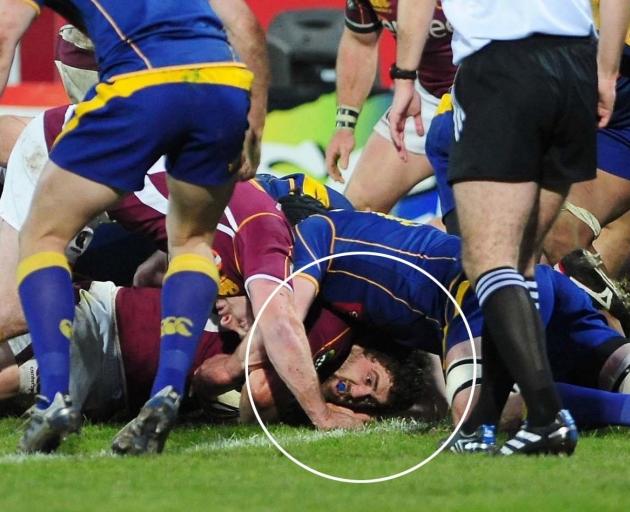 Southland captain Jamie Mackintosh (circled) is about to be awarded the only try of the game. Photo: Craig Baxter
The whole region was into it. The week leading up to the game was full of stories about Otago's then 53-year drought and the questions of if we would be able to get that piece of timber back to Dunedin. It was amazing to be part of the process and to experience how a challenge like that can bring people together and get the best out of a group. Our trainings that week had an extra edge to it.

Arriving in Invercargill the atmosphere was everywhere. I went with Kees Meeuws and a few of the boys for a strong espresso in town and remember soaking it all in. Everyone was focused and determined.

Matt Saunders (Southland midfield back): We'd played those early-season games but we knew Otago was the first big one of the season. The atmosphere was what I remember the most about the game. Probably the best I have ever played in. We were pretty wound up before the game. Just could not lose.

Jason Rutledge (Southland hooker) We'd been up at the Highlanders and there was plenty of talk around bragging rights. Otago had dominated for so long but it was now our turn. We had some good players, a pretty forward-orientated team with a good midfield.

Glenn Dickson (Otago midfielder) We started quite well. We were massively up for it. We had them under the pump. Then I got binned for a tip tackle. Smithy [Ben Smith] had a couple of shots at goal which he narrowly missed. There I was, sitting on the sideline, helpless, watching the boys.

The traIn packed with Otago supporters arrives in Invercargill. Photos: Peter McIntosh
Otago led 9-6 at halftime in a forward-orientated game. Southland came back into the game in the second half.

Saunders: We probably didn't play that well. Neither did they, really. But we managed to put the pressure on.

Joubert: The rub of the green went against us with the penalty count too high, but still we were leading 12-9. After that my memory is of a scrum that collapsed on me. My shoulder popping from its socket. 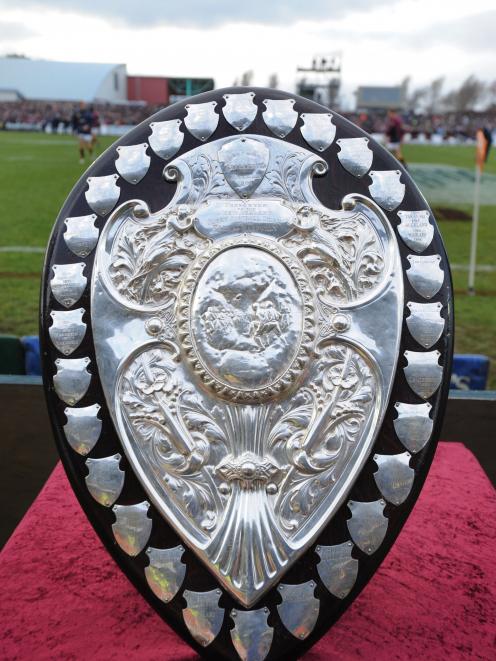 What was to be fought for in 2010 and will be up for grabs in 2019.
Dickson: Eben was on fire. He was everywhere and then he buggered his shoulder. When he went off we lost a bit of fizz.

Joubert went off and Southland roared on to attack. Otago prop Sam Hibbard was yellow carded. Southland captain Jamie Mackintosh made a drive for the line, was lowered but stretched out and was ruled to have scored. The conversion put his side 16-12 ahead with a few minutes left.

Rutledge: Whopper got that try and it was always going to be contentious. They always are.

Saunders: We just had to get that one try and we managed to do it. But it was so close. The quality of the game sort of got overlooked as it was so close and we just got over the line.

Dickson: We were two similar teams who cancelled each other out. It came down to a couple of points. Everyone wants to win the Ranfurly Shield but it was not our night. With 10 minutes to go I thought we were going to do it.

Southland ended up the winner 16-12 and saw off three more challenges before losing the shield to Canterbury.

Dickson: I remember watching overseas in 2013 when we won. I was massively proud but just so jealous, knowing what the next few days would bring. I suppose that is why everyone wants to win it. Everyone remembers who won the shield.

Saunders: We are having a reunion next month for the team 10 years after taking the shield. A lot of them are still playing. But it was a special time.