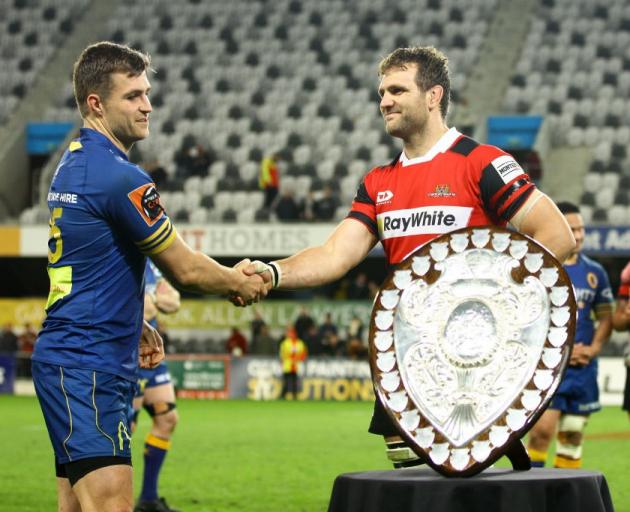 Otago will have a chance to get the Shield back to where it belongs next season. Photo: Getty Images
Otago will play some top sides in its crossover matches in next year's provincial competition and a Ranfurly Shield challenge is among them.

After Otago finished third in the championship this year, it had little to pick from.

The draw for the crossover matches in the Mitre 10 Cup was carried out this week by provincial bosses and Otago has drawn the top four teams from this year's premiership division.

Premiership winner Tasman picked to play Otago in the first round of selections, in a match which will be played in Dunedin. Tasman, though, had the final pick and only had Otago left.

Six teams before Tasman had declined to pick Otago, as the side had fashioned a decent record under the roof at Forsyth Barr Stadium.

Otago then got to pick next in the second round and it picked Auckland to be played in Dunedin, although it only had two teams to pick from.

Canterbury then selected Otago in the next round as a home game and this will also double as a Ranfurly Shield challenge.

The red and blacks took the shield from Otago in the final defence of this season.

Otago's final crossover game is against Wellington in the capital. Otago had the pick but only had a couple of teams to pick from.

It will not play Bay of Plenty, Waikato and North Harbour next year. Each team plays all teams in its division along with four crossover matches against teams in the opposite division.

New Zealand Rugby chief rugby officer Nigel Cass said while the 2019 season finished only a few weeks ago, provincial unions are already turning their focus to 2020.

"The unions have been asked to provide feedback on the season and we will look to see if improvements can be made as we look towards next year's competition," Cass said.

The main issue many unions had with the two divisions is a team from the bottom competition - the championship - did not have the ability to be the best province in the country.

Otago Rugby Football Union general manager Richard Kinley said there was nothing to suggest that there would be any changes to the competition next year.

The competition is likely to start in August and the draw is to be settled in the new year.