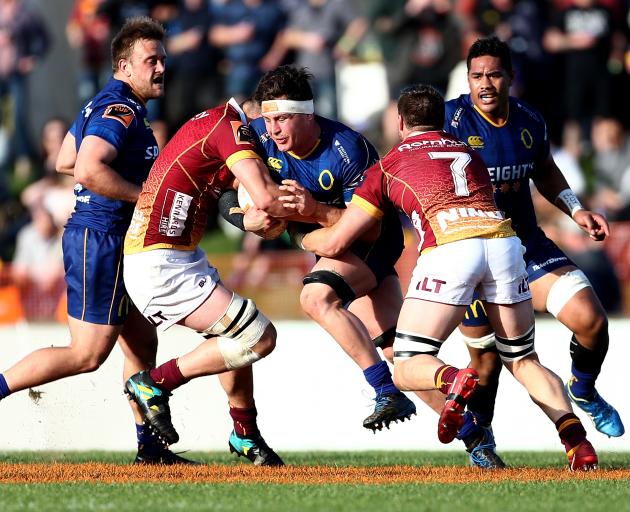 Dylan Nel in action for Otago during a Mitre 10 Cup game in 2018 against Southland. Photo: Getty Images
Otago and Southland are "100% fully committed" to this year’s Mitre 10 Cup.

What form the competition will take is still being finalised but Otago and Southland bosses both say they are keen to take part.

It was a reported earlier this week some provincial unions are wavering on committing to the Mitre 10 Cup due to expense.

Southland, along with Taranaki, North Harbour and Northland and North Harbour,were said to be considering pulling out of the competition while Otago and Wellington were sitting on the fence.

Otago Rugby Football Union general manager Richard Kinley said Otago had never once discussed pulling out of the competition and was fully committed to it.

It has signed 21 players for the coming season.

Kinley said Otago was always committed to participating in any national provincial competition.

All provincial unions understood their participation was subject to fully understanding the financial impact of doing so.

"So we keenly await a resolution to the current negotiations between New Zealand Rugby, the New Zealand Rugby Players’ Association and provincial unions, to provide greater certainty as we continue to plan and prepare for the Mitre 10 Cup," he said.

Southland Rugby Football Union general manager Steve Mitchell said the union was like Otago and 100% committed to the competition.

The board had committed to playing in the competition whatever form that took, he said.

They too were waiting for the outcome of the discussions between NZR and the players’ association.

It was complicated as there were other parties involved such as provincial unions and Sky TV and all parties must agree.

Southland had signed more than a dozen players and was looking to add some more to its squad.

The team had a new coach in Dale MacLeod and he is looking at adding players from the club competition.

The top Southland club competition was set to start on
June 20 and draws and registration were being worked out at
the moment.

Mitchell had started his role just before the lockdown and was still working in Nelson. He was due to move to Invercargill next week.

New Zealand Rugby announced earlier this month, the Mitre 10 Cup is scheduled from September 11 to November and would involve all 14 provincial teams.

A draw has yet to be announced.