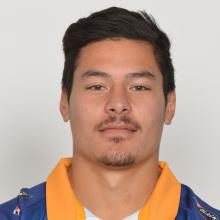 Sio Tomkinson
Otago will get some reinforcements for its game against Canterbury in a couple of weeks.

The side has to play Counties-Manukau and Northland before then, both at home, but then have to venture north to Christchurch on October 30 to take on Canterbury.

Otago will have both openside flanker Slade McDowall and midfield back Sio Tomkinson back for that game.

McDowall was sent from the field in the match against Hawke’s Bay on October 4 and has been given a three-week suspension for a reckless tackle. He will be available for the game against Canterbury.

Dylan Nel filled in for Otago at the openside flank last week and had some strong moments.

In the same game against Hawke’s Bay, outside back Vilimoni Koroi picked up a yellow card for colliding with Hawke’s Bay replacement back Caleb Makene when chasing a kick.

But that yellow card had been rescinded as it was ruled another Hawke’s Bay player had made Makene lose balance.

Koroi played last week against Wellington and helped himself to two tries as Otago scored a late win.

Otago will welcome back hooker Liam Coltman and first five-eighth Josh Ioane from All Black training for the match.

The Counties-Manukau side has won just the one game so far this season, a narrow victory over Manawatu at Pukekohe a couple of weeks ago.