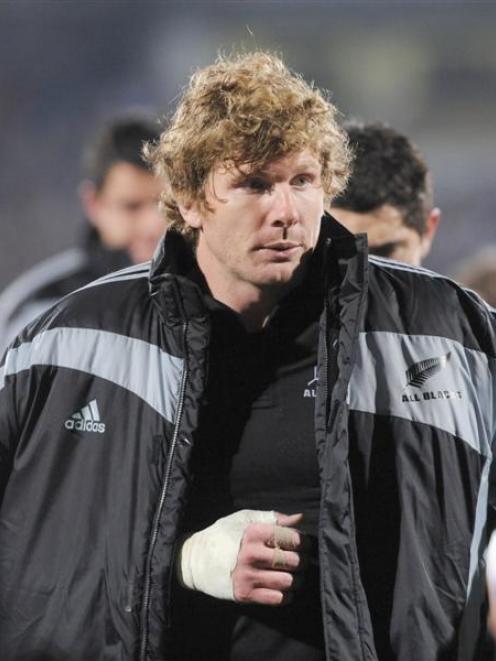 Thomson's break is the latest in a long line of injuries to concern the All Black coaches, who are also having to deal with questions about the suitability of the Super 14 as a warm-up for test rugby.

All Black assistant coach Steve Hansen confirmed yesterday Thomson had broken a bone in his right hand and would be out for six weeks.

He would miss the rest of the early season tests and at least the first half of the Tri-Nations tournament.

Hansen said Thomson broke the bone inside the first 20 minutes of the game, but played on.

Thomson was replaced by Tanerau Latimer after 60 minutes.

He has been replaced in the All Black squad by former Otago loose forward George Whitelock, who now plays for Canterbury.

Hooker Andrew Hore is another casualty, having damaged his ribs, and Chiefs hooker Aled de Malmanche has been called into the squad.

Hore's availability for the second test in Wellington will be decided later this week.

Hansen said the spate of injuries was just a natural product of professional rugby and he was not using that as an excuse for losing.

He said experience could not be bought and many players relatively new to test rugby got a rude awakening on Saturday.

"Experience allows you to understand what you have to bring to the occasion. And it took some of our players time to realise this is different from what they've been to before. They've got to be stronger, bigger and mentally stronger than before," Hansen said.

He said once players realised the level of intensity in the test match, they competed better, but there was plenty to work on.

"There is still a long way to go to get that physical presence."

He said all teams suffered injuries and perhaps it was just time for the All Blacks to suffer a spate of them.

He conceded some of the injuries were down to not a long enough rest period for players between seasons.

"Some of the injuries are straight-out contact. But others aren't. That is why the New Zealand Rugby Union fought so hard to get a later start for the Super rugby series and why NPC is being looked at so hard for guys who are playing in the All Blacks."

Loose forward Jerome Kaino and halfback Brendon Leonard are likely to be available for the next test but centre Conrad Smith and lock Ali Williams are doubtful starters.

Hansen admitted straight after the test on Saturday night that players needed to quickly realise Super 14 rugby was four or five rungs below test rugby.

All Black coach Graham Henry said Super 14 rugby was a different style from what was seen on Saturday night.

"It is played in summer, played on top of the ground. It is not a stationary game, not a kicking game, more of a ball-in-hand game," Henry said.

"Our guys found a change to a more driving line-out game quite different from Super 14."

Henry said Super 14 produced quality rugby players but there was little driving play in that tournament.

"It is certainly a big change to play a side at scrum time and drive from the line-outs. We struggled with that. They have not changed their style, while we have, and it is going to take a while for us to get used to it."

He said it would have been handy to have the rule of being able to collapse mauls but that rule was no longer allowed, so the All Blacks just had to start looking at how to combat driving play.

Henry felt his side had come back into the game well after the first 30 minutes, when it struggled with the physicality of the French.

He said the intercept try by French fullback Maxime Medard was the killer.

The scrum struggled, Henry said, and players were knocked back behind the advantage line too often.

All Black backs coach Wayne Smith was disappointed with the chasing of kicks and said it was hard to get round the French rush defence.