All Blacks ramping up training intensity 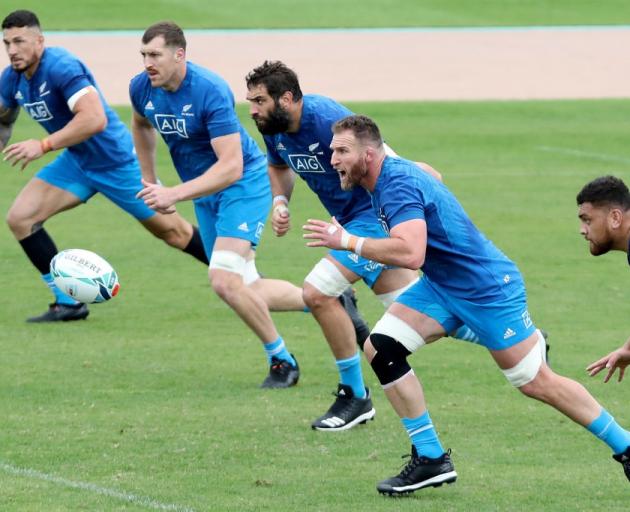 They are running themselves ragged on the training pitch; so much so that the numbers they achieved were similar or even better than an average test match.

It was one intriguing piece of information revealed by head coach Steve Hansen, a man today on a mission to avoid any headlines which could be construed as disrespectful to Ireland, the All Blacks' quarterfinal opponents in Tokyo on Saturday.

In providing a positive environment for his players following last Saturday's called-off match against the Italians in Toyota City due to Typhoon Hagibis, a violent storm which has caused many fatalities in Japan, Hansen was always going to put a spin on what has turned out to be a relatively restful weekend for the All Blacks.

The rest, according to Hansen, was earned, however, because on Friday his players were made to work. How exactly he wouldn't say, but it's likely to have involved an extended game-like session between all 31 squad members with each individual's workloads measured by a little GPS device inserted into their jerseys. All top teams have access to this real-time information in training and games.

"Having a week off is not a bad thing," Hansen said. "We're quite excited by that fact. It's allowed us to work really hard on Friday. Our GPS numbers were the equivalent or just above what a normal test match would be. We don't feel like we've lost any opportunity to get ourselves where we need to be."

Asked how that was achieved, Hansen replied: "I can't tell you that, otherwise I'd be giving away IP [intellectual property]. I'm not allowed to give away IP - it's something you've got to keep in your back pocket."

The All Blacks' last game was their big win over Namibia on October 6. Their test against the Springboks was way back on September 21.

But loose forward Sam Cane was in no doubt about how he and his fellow players were placed physically and mentally.

"Not having a game in the weekend, yeah we were disappointed to start with but we put in some serious work on Friday; similar to a load we get in a game," Cane said.

"Physically and mentally we're in a really good spot. We're actually fizzing to play rugby … we're right where we want to be."

Coach Hansen is too, not that he was giving much away about anything else. His refusal to light any fires under the Irish and their Kiwi coach Joe Schmidt (apart from a subtle dig about his rival's penchant for analysing the opposition) would have been a deliberate tactic. It's playoffs time now and the difference in approach is clear.

"They're a quality side," Hansen said of Ireland. "They've been No 1 this year. Our last three results have been loss, win, loss so there won't be any complacency in our camp.

"There's a lot of respect from both sides. We played them in November and it was a titanic struggle. On that day they were the better side. Most teams we play get up 10% better than they normally do. They're no different. The big difference here is that it's a do or die game for both teams."

Asked by an Irish journalist how Ireland, who have never won a World Cup knockout game, were coping with the expectation of being a leading contender, he replied: "You've probably seen them more often than me because you live there. How do you think they're getting on?

"Not great," was the reply.

"Well, they're in the quarter-finals so they're not doing too badly are they?"

Asked by a Japanese journalist what the key was for Japan to beat South Africa in their quarterfinal, Hansen said: "Score more points than the Springboks."

There was, however, genuine feeling for the country following the devastating typhoon, and clear respect to how the hosts are playing. Hansen said he was thankful Japan were on the other side of the draw, and he meant it.

"I might add too that I'd like to pass on our sympathies to the Japanese people who have lost family members and property and so forth. Having been through a natural disaster myself I know it can be pretty shaky. We're very supportive of them.

"It's a good way to play footy isn't it?" he said of Japan's attacking style.

"It's worked against Ireland, it's now worked against Scotland and their other pool opponents Samoa. People have said who you want to play, well, they're the in-form team so I'm quite happy they're on the other side of the draw."