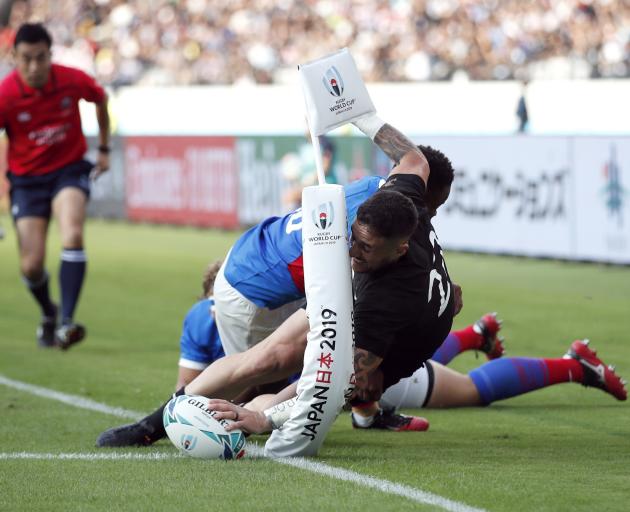 TJ Perenara scores a stunning try for the All Blacks. Photo: Reuters
When All Black coach Steve Hansen says he was out of his seat with excitement you know something extraordinary must have happened - and TJ Perenara's amazing try to seal their 71-9 victory over Namibia was certainly a moment to savour.

Perenara started it when he charged down the left wing and kept the ball alive as he was dumped to the turf on Sunday.

The ball was then fed to fellow-replacement Brad Weber, who produced the most outrageous "round the back" pass into the hands of Perenara, who had sprung back to his feet to run in support.

The pass brought gasps of appreciation from the Tokyo Stadium crowd, but there was more to come as Perenara tip-toed just inside the touchline then flew into a desperate, twisting dive and somehow touched down in the corner as he was being tackled.

It took several replays before the TMO, probably as disbelieving as most of the crowd, ruled that he had got the ball down cleanly.

"We did some good things and how can you not mention the try at the end? It was a special one. It even got me out of my seat and not too many things do that," said the uber-lugubrious Hansen.

Assistant coach Ian Foster added: "I think it was probably our fault as coaches because we put two nines on the field (Perenara and Weber) and mayhem was going to occur.

"I actually thought that TJ made some really good decisions in that. It was a really special moment. Obviously the scoreboard allowed them to express themselves and they got away with it."

Captain Sam Whitelock, who got a rare try himself as New Zealand eventually crossed 11 times after a tricky opening half-hour against the African part-timers, was also full of admiration.

"We talked in the huddle about finishing the game strong and TJ was saying that if he saw an opportunity then he would go for it," said the lock. "Then a couple of halfbacks linked up and I'm not sure how he got it down but it was pretty impressive."

Namibia's players did themselves proud, their commitment underlined by the desperate attempt to keep Perenara out at the death, and coach Phil Davies was able to appreciate both sides.

"I was off my seat with the effort of the tackle and also TJ's run into the corner," he said. "It is great to be able to contribute to the spectacle and as a rugby man it was great to be involved in, and that last bit there perhaps epitomised what had gone on before."