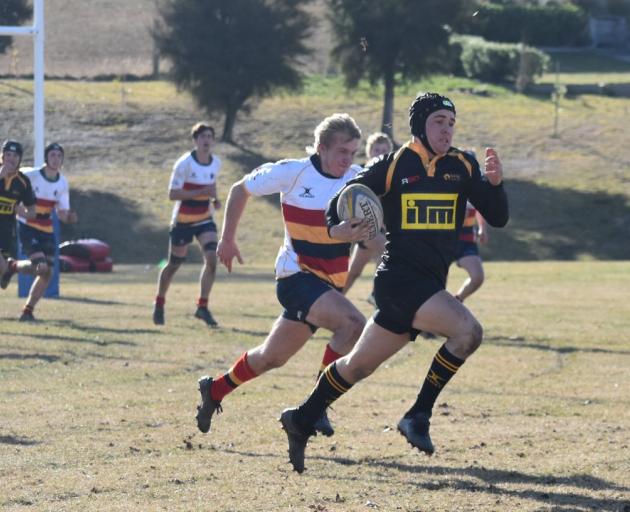 Kamryn Reddy of Mt Aspiring College on his way to the try line after intercepting a pass against John McGlashan College in Wanaka Saturday while Andrew McKenzie gives chase. Photo: Andy Reddy
The Combined Coeds might be edging a little closer to a win this season.

The side recorded its fifth consecutive loss in the Otago Premier School competition.

It was beaten 39-19 by Otago Boys’ second XV in a championship match at Outram on Saturday.

Otago Boys’ is undefeated and will advance to the premiership for the second round.

St Kevin’s will join it in the top flight.

The Oamaru side had a healthy 59-29 win against South Otago in Milton.

In the other championship game, Wakatipu High beat Waitaki Boys’ 33-10 in Queenstown, while in premiership, Mt Aspiring beat John McGlashan 40-33 in a high-scoring game in Wanaka and Otago Boys’ beat Dunstan 42-13 in Alexandra.

Both John McGlashan College and Mt Aspiring College will drop down to the championship for the second round, switching places with Otago Boys’ 2nds and St Kevin’s.

Combined Coeds co-coach Jared Peacock said while his side was well beaten on Saturday, the team was very much in the battle at halftime.

It trailed 17-14 and even though the team faded in the second spell, it gave a good account of itself.

"It was a pretty strong effort by everyone, really," Peacock said.

"Otago Boys’ played really well. They are a pretty strong side and they are going to do well going up a grade.

"But it was nice for our boys, who have had some bigger losses lately, that they showed that they are there or thereabouts."

Otago Boys’ scored shortly after the break and dominated the next 20 minutes to pull away.

But first five-eighth Finn McDonald-Page was one of the standout performers for the Coeds.

"He was very strong and was able to control the game.

"He ran the ball when he needed to and he was able to link with the other pods around him."

Midfielder Riley Horne also produced a top effort. He is fresh from an injury break and was solid on defence and scored a try in the first half.

Openside flanker Harvey Amende carried well and stood out for his physicality.

The Combined Coeds are in their second year and Taieri College has provided the bulk of the squad this season.

The top-of-the-table premiership match between King’s and Southland Boys’ will be held in Invercargill tomorrow.

Kicking off at 1pm, the game will be broadcast on Sky Sport.