David can leave his sling behind next year.

The Otago Premier Schools organisers are set to put an end to some of the more biblical mismatches.

The tournament concluded at the weekend when Otago Boys' High School defeated King's High School 34-17 in the final.

Of most concern were some lopsided scores in the initial round-robin phase.

''On the whole we were reasonably happy with how things panned out,'' Heller said.

''But obviously we were aware that there were some difficulties, particularly around the ability of some of the lesser co-ed schools to sustain their numbers.''

That lack of depth was highlighted by some heavily one-sided games and a ''couple of defaults''.

''That wasn't ideal and we did have some teams that were really struggling just to get the numbers on the park.

''The way the competition played out there was a clear top four who were quite a way ahead of the other teams.''

The council discussed the issue at a meeting at the end of July and came up with a proposal it hopes will rid the competition of some of the worst mismatches while still giving every team an opportunity to win the Otago Daily Times Cup.

It is one of two proposals which the schools will mull over before the next council meeting next month.

Both proposals are based on the same 12 teams returning next season, although it is unclear whether Southland Boys' High School will want to remain in the competition.

The Southland side was forced to play most of its games away from home and may want to play more home games next year.

It is an Otago-based competition and, as Southland Boys' only came in late this year, many teams were reluctant to travel to Invercargill.

The favoured option for next year would involve the competition splitting into two pools of six.

The top six sides from 2019 would play each other in a round robin, and the bottom six would do the same.

At the conclusion of the second round, the 12 teams would split into three pools of four with seminfinals and finals to follow.

The other proposal, which is still a work in progress, would involve the 12 teams splitting into three groups of four from the start.

Otago Boys' High School is due to host the South Island final on August 31. 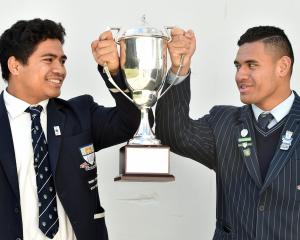