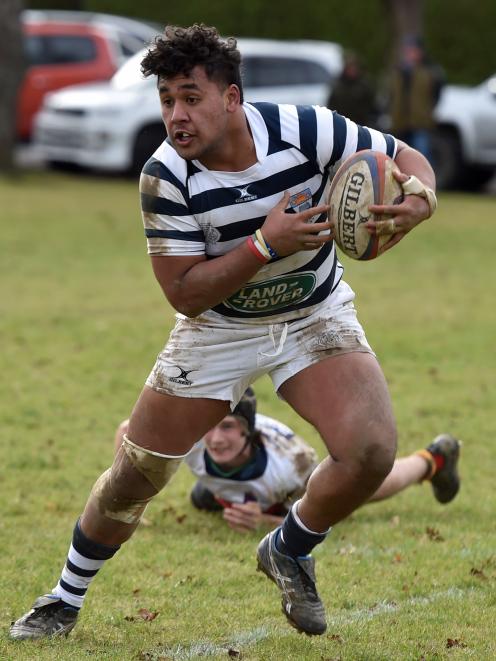 Last weekend the side suffered a rare defeat. It lost 28-16 to rival King’s High School at Littlebourne.

It had been 13 years since it last lost to King’s, so backing up with a loss to McGlashan would have been unthinkable for the powerhouse.

Otago Boys’ had to work hard for the win, though.

The Johnnies team members were desperate for a win after notching up back-to-back losses in the tournament.

Otago Boys’ coach Regan Turoa said the game was "back and forth".

"We played into the wind in the first half and handled the ball well, controlled it well and got our points.

"Johnnies did the same thing in the second half and came right back into it.

"But when we did get into their half in the second half we scored pretty quickly. But they tended to hold the territory and the ball for most of the second period."

Otago Boys’ pivot Finn Hurley had an impressive match. He attacked the line well and guided his side around the field nicely, while powerful No8 Semisi Tupou Taeiloa had a "barnstorming game".

"He scored probably a 50m try off the back of the scrum and beat about five or six defenders".

"He sort of turned the game for us at a point where we really needed it."

Johnnies midfielder Josh Whaanga had a strong game on defence and was arguably the pick of the McGlashan players.

In the other two premiership matches, King’s beat Mount Aspiring College 43-3 and Southland Boys’ was too good for Dunstan High School, winning 43-10.

In the championship, Otago Boys’ 2nds edged Wakatipu High School 12-7 and South Otago High School had a narrow 33-31 win against the Combined Coeds.