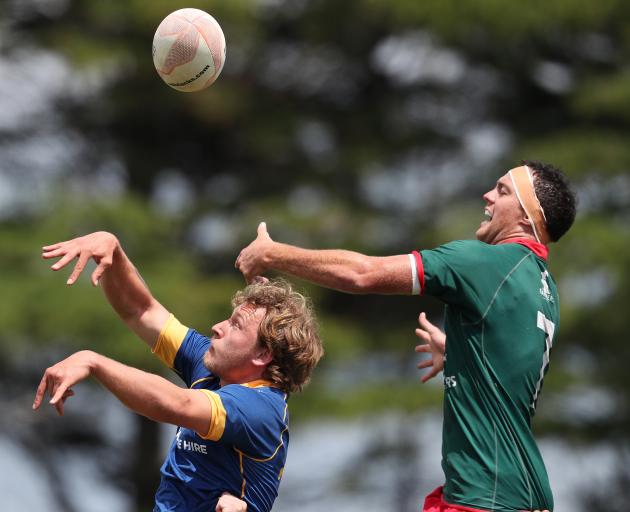 Otago’s Isaiah Duncanson (left) and Wairarapa Bush’s Rihi Brown compete for the ball during a national sevens match at Tauranga Domain yesterday. PHOTO: GETTY IMAGES
Otago teams fought hard but came up short at the national sevens championships in Tauranga over the weekend.

The Otago men lost the ones that mattered in pool play, going down 24-12 to Tasman and then losing a tight one, 7-5, to Waikato. Those two losses cost it any chance of making the top eight.

The Otago women had a better first day. They defeated Bay of Plenty in something of an upset, 17-10, and then lost to Auckland 26-0. But they made sure they qualified for the quarterfinals when they beat North Harbour 40-7.

The women’s side had a tough job in the quarterfinals as it had to take on the physical and quick Waikato side.

The Waikato team took a 12-0 lead early on. But Otago refused to put up the white flag and got back into the contest early in the second half when Rosie Buchanan-Brown managed to go over down the left.

Then a nice exchange of passes from Cass Yee and Rosie Kelly put Yee away and she sprinted away to score.

Kelly could not add the extras so Otago still trailed 12-10. It looked to score the clincher but Waikato grabbed the ball and Leanna Ryan stepped past a couple of players to score under the posts to seal a 19-10 victory.

Otago then lost to Manawatu to go out of the running in the plate section.

Counties-Manukau won the women’s final, 12-5 over Waikato after it led 5-0 at halftime.

The Otago men had a better second day. They easily defeated Wairarapa-Bush 24-7 and then made no mistake against Wellington, winning easily 42-12 after leading 21-5 at the break.

The side was unlucky to lose to Tasman on the first day, a couple of calls not going its way and some small errors proving costly.

Otago faced up to Counties-Manukau in the final of the bowl to decide ninth and 10th place and it was a game which was all over the place. The southerners took an early lead but Counties-Manukau came back and the game was tied 19-19 with a couple of minutes to go.

Otago turned the ball over and its opponent managed to slide over to win the game.

Taylor Haugh was outstanding for Otago during the weekend, while Charles Elton got through plenty of work, as did halfback Kieran McClea.

Southland made the top eight but lost to 17-7 in a quarterfinal against Taranaki and then lost 19-17 to Tasman to go out in the plate section.

Waikato beat Auckland 29-5 in the final.

The Otago women beat Wellington 20-5 to end up seventh.