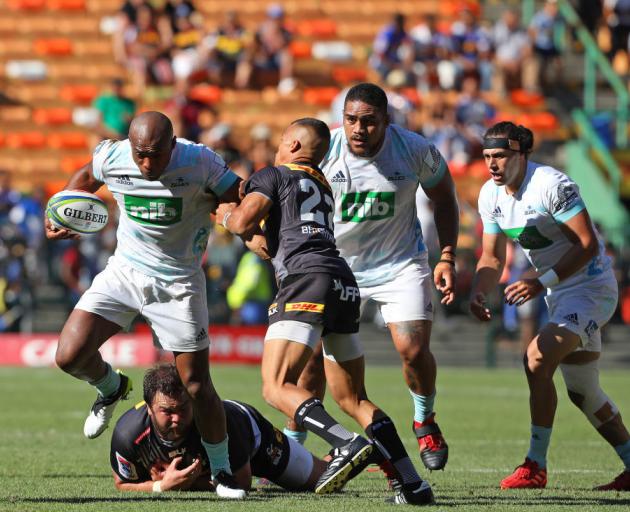 Mark Telea of Blues during the Super Rugby match between DHL Stormers and Blues in Cape Town. Photo: Getty Images
Time away from home has proved the perfect tonic for the Blues. Few, if anyone, predicted they would pull off an unbeaten two-match tour of South Africa. Having achieved exactly that feat, their season now has a very different complexion.

Stunning the previously unbeaten, league-leading Stormers in Cape Town is no easy feat.

This season the Stormers were four-from-four. Coming into this match they had conceded seven points in three home matches, holding the Hurricanes and Bulls scoreless.

In this 33-14 victory, the Blues made a mockery of those defensive efforts to break the game open from the outset and improve their record to three wins from five games – all three of those successes coming away from home.

Buoyed by their last-gasp win over the Bulls last week, the Blues relished the chance to unleash their attacking game at a sun-drenched Newlands.

Locals were stunned as the Blues raced out to lead 20-0 after 23 minutes. While the Stormers came back, the Blues refused to relent.

It was impeccable rugby early from the Blues. Patrick Tuipulotu led from the front with crushing tackles that forced turnovers and powerful prop Karl Tu'inukuafe put in a busy 68 minute effort in the taxing heat.

Collectively the Blues forwards, the loose trio in particular, physically dominated through strong carries to establish the desired front-foot platform. They retained possession for long periods which built pressure and allowed the backs to flourish.

Slick handling between the Blues backs and forwards regularly identified and exploited space. They used variety in attack with cross-field kicks successful, but often it was simple and effective set and reload efforts which worked in frustrating the Stormers.

Otere Black, following his sweetly-struck match-winning penalty in Pretoria last week, again pulled the strings with composure and his flawless kicking display, in which he collected 18 points, offered a steadying influence the Blues have lacked in recent times.

As has been the case this season, Stephen Perofeta was a threat every time he injected from the backfield, supporting Black well in the playmaking duties.

TJ Faiane, in his return from injury, was prominent too with offloads and one classy skip ball laying on a try while halfback Sam Nock, in his first start of the season, delivered an assured decision-making performance from the base.

Three first-half tries, including a brace from English recruit Joe Merchant, who was named man of the match after impressing in his move from the more accustomed midfield role to the wing, gave the Blues a surprise 27-14 halftime lead.

That margin could have been much better but for a couple of coach killer errors.

Defensively the Blues were, largely, well organised and clinical, pulling off several dominant hits and scrambling superbly in the wide channels. This aspect, more than anything else, epitomised their attitude which set the tone.

Two first-half errors from Rieko Ioane in his return from injury, the first in which he spilled the restart 10 metres out from his line, let the Stormers back into the match with a subsequent try to No 8 Juarno Augustus.

The locals then made the most of Mark Telea's yellow card for disrupting his opponent in the air by closing within six points after Sergeal Petersen's try – Ioane's defensive read from centre exposed on this occasion.

There were shades of the Blues' opening round loss to the Chiefs when they blew their 19-5 halftime lead at Eden Park.

As they did last week, though, the Blues regrouped and responded with Merchant's second strike – sparked by Telea's hot stepping – after the half time hooter.

The second spell was a case of the Blues controlling the tempo and showcasing a ruthless edge to close out a second straight victory.

They will now trek home in positive spirits, hoping to harness this new-found confidence against the Hurricanes in Wellington next week.