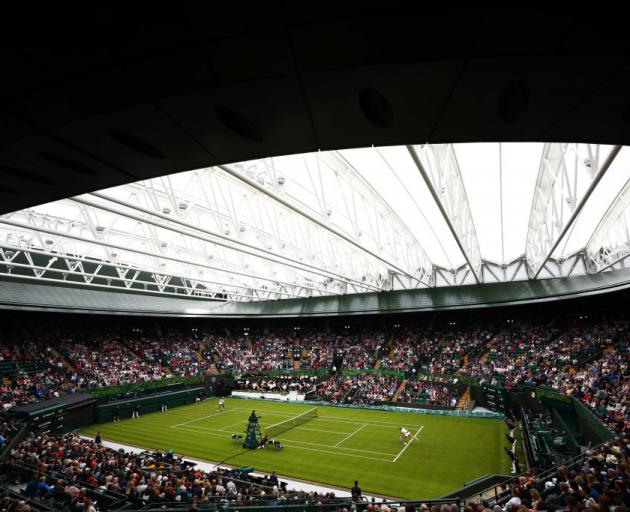 Wimbledon is expected to be cancelled later this week. Photo: Getty Images
Wimbledon organisers will announce the tournament's cancellation this week, according to reports.

German Tennis Federation (DTB) vice-preseident Dirk Hordorff told Germany's Sky Sports the announcement would be made later this week due.

It follows the majority of other sporting events worldwide to postpone or cancel due to the coronavirus pandemic.

All England Lawn Tennis Club (AELTC) officials earlier said the June 29-July 12 event would not be played behind closed doors and postponement was not without significant risk and difficulty.

"Wimbledon has stated that they will have a board meeting next Wednesday [local time] and will make the final decision there," Hordorff told Sky Sports Germany.

"I am also involved in the bodies of the ATP and WTA. The necessary decisions have already been made there and Wimbledon will decide to cancel next Wednesday. There is no doubt about it. This is necessary in the current situation.

"It is completely unrealistic to imagine that with the travel restrictions that we currently have an international tennis tournament where hundreds of thousands of people from all over the world would travel. That is unthinkable."

The AELTC did not respond to a request for comment.

The postponement of the Tokyo Olympics opened up a two-week window in the tennis calendar in July/August but it is less likely that it will be feasible for Wimbledon, which has only two covered courts and cannot be held past late summer.

French Open organisers stunned the tennis world by unilaterally postponing the claycourt Grand Slam at Roland Garros from May until late September because of the pandemic.

The French Tennis Federation (FFT) came under heavy fire from tennis players around the world at the lack of communication as the new dates clashed with several other events already featuring on the calendar.

The men's ATP Tour and the WTA, which runs women's tournaments, require their players to participate at the four Grand Slams.

But the new French Open dates are yet to feature on the calendars of either association.

"The unilateral behaviour of the organizers has been criticized by everyone and I can simply predict that the French Open will not be relocated as it was intended," Hordorff said.

He said either the FFT would go ahead with the new dates and feel the wrath of the entire tennis world or they have the option to start working with others to draw up a plan that makes sense for everyone.

"They will be deprived of the points and they will degenerate into a chaos event," he said.

"Even those there have understood that and they are slowly crawling back. Solidarity is the order of the day, it is a matter of being together and not going it alone, as the president of the French Tennis Association did."