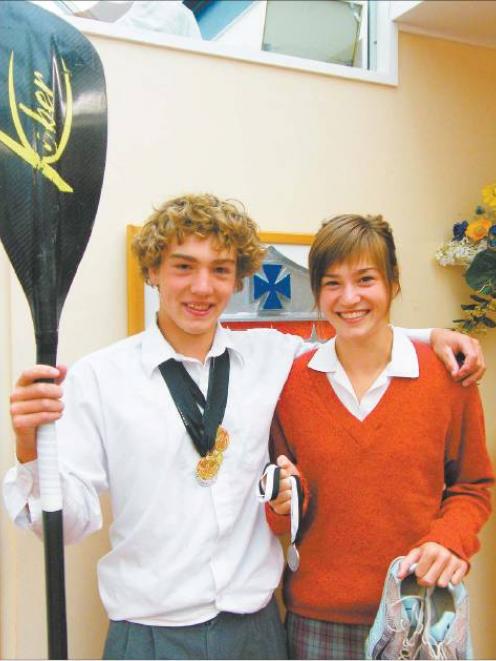 Sibling support: Malcolm (15) and Rebecca (17) Gibson offer each other congratulations on their respective sporting successes.
Sporting success can run in families - well, it certainly does in the case of the Gibson family, with brother Malcolm and sister Rebecca both performing well at a national level recently.

Rebecca (17), has just returned from Auckland, , where she competed over the weekend in the national 19-and-under 400m athletics track event, finishing second in a personal best time of 57.79sec.

Rebecca said her ambition was to start to make New Zealand teams and travel overseas with her athletics.

‘‘It's a worry that the younger girls are running faster than us. The winner of the 16 years' event was in the 56 seconds - so I have a lot of work to do.''

She said she was the only nationally-ranked 400m female runner in Southland and her only competition was competing against the boys.

‘‘It's pretty hard running against the boys.''

Rebecca said her parents and extended family had always offered the children great support for their sporting activities.

‘‘They have always been there to transport us all over the place for events, encouraging us and others, including our friends.''

She said she did harriers in the winter to keep fit and she continued training for her athletics all year round.

‘‘Harriers is good because it gives me endurance training and friendship,'' Rebecca said.

‘‘It can get pretty lonely training and running by yourself all the time.''

Brother Malcolm (15) is building up to represent New Zealand in the white-water kayaking world championships in Europe in June.

He recently competed in the Secondary Schools and Open white-water kayaking nationals.

‘‘In the Secondary Schools, I got first in the C1 class and third in the K1 class.

The K1 class involves a double-ended paddle, with the kayaker sitting in the kayak.

The C1 class uses a half paddle that is changed from side to side, with the kayaker kneeling in the kayak.

Malcolm said the results were good for the time of year and considering he did not peak for this event.

‘‘I'm just building up for the worlds at this stage, but I did do better than my main rival in the New Zealand team, so that was satisfying,'' he said.

St Peter's College deputy principal Lindy Cavanagh-Monaghan said the performance of the Gibson siblings showed that with dedication, talent and family support, young people could shine at a national level, no matter how small the region they came from.