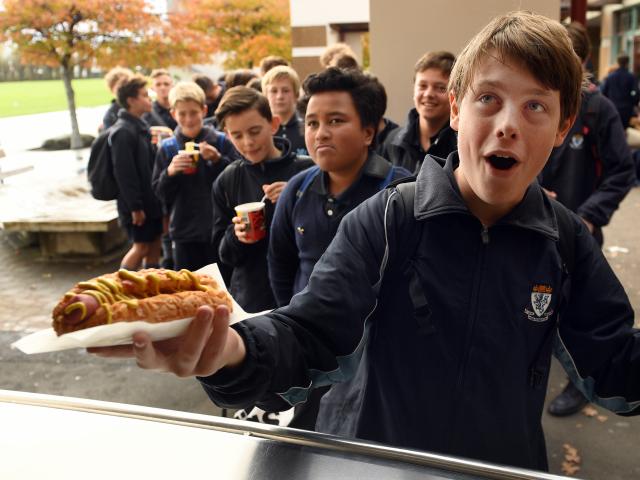 King's High School principal Dan Reddiex is the only secondary school principal in New Zealand to this year receive a Woolf Fisher Fellowship for educational excellence in teaching.

A King's High School chemistry teacher is preparing for his return to Nepal as a volunteer teacher by raising funds to buy books for Nepalese children, and practising the pronunciation of important Nepalese words.

The ''trauma'' of selling hundreds of raffle tickets and making thousands of cheese rolls will be little more than a distant memory for 23 King's High School pupils as they board a flight for London today.
My teacher He says Rhyming is Bad A speeding rainbow of nations
The silver Ford Spectron pulled up in the driveway of the khaki green cottage.
Dad's sitting in the corner of the small couch, reading about historical places.

The best skateboarders in Dunedin will get technical on the rooftop of Northland Mall in Christchurch today.

Three distinguished past pupils of King's High School, in Dunedin, have been inducted into the school's "wall of fame".

It was a record-breaking day for Otago Boys' High School at the Forsyth Barr Stadium yesterday.

They admit to being fierce competitors, and in a sport where seconds can mean the difference between winning and losing, that competitive streak can be crucial.

It's raining, it's cold, it's dark, you're in pain and you don't want to be there, but it's how you deal with those difficult moments that really counts, Olympian Bruce Kendall says.

The chemical smell of chlorine rises to greet me as I walk into the pool complex.

I gazed out upon the grassy field, which was now a muddy mess.

Most of us know the first lines of poet William Wordsworth's Daffodils. And some of us are probably familiar with the recent phenomenon of turning classic works of literature into mash-ups. This is King's High School year 12 pupil Reuben Hilder's Daffodils: zombie mash-up.