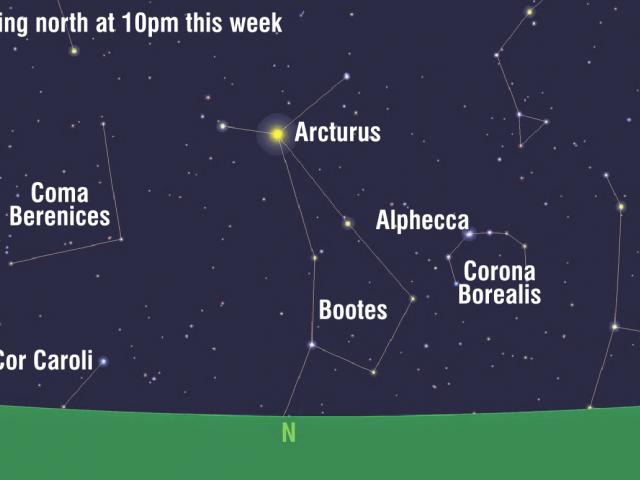 With new moon occurring on June 10, the early part of the night will be dark, making it the perfect time to stargaze.

The moon reaches the first quarter just after 10am on Thursday, which means our closest celestial neighbour will be relatively high in the northwestern sky at sunset.

For people who don’t enjoy late nights, there’s a whole branch of astronomy that takes place during the day — it’s called solar astronomy.

One of the sheer joys of stargazing in this part of the world is spotting an aurora australis glowing in the southern sky.

The moon was new just after 8.30 Saturday morning.

If you do one thing this week, you really must try to spot Mars.

The sun’s centre crosses the celestial equator moving from north to south at 1.30am on Wednesday. This marks the exact moment of the spring equinox in the southern hemisphere.

This week, instead of drawing your attention to something high up, I’d like to do quite the opposite. I want you to try to find the fifth and sixth brightest stars, which will be near the horizon...

The moon reaches the last quarter phase at 9.26pm on September 10. This means moonlight will be absent for the early part of the night, making the hours between sunset and midnight prime time for...

A couple of weeks back, I encouraged you to find a relatively bright comet, writes Ian Griffin.

David H. Levy knows a thing or two about comets. He has discovered or co-discovered more than a dozen of them during his comet-hunting career, writes  Ian Griffin.

Today (Sunday) marks the end of the Puaka Matariki Festival. Celebrations have been taking place across Dunedin this week with a wonderful programme of events. Before European contact, Maori looked...

This week, as the sun sets in the northwestern sky, Jupiter rises in the southeast. You can't miss the biggest planet in the solar system. It looks like an incredibly bright yellow-white "star".

The Earth reached the high point of its orbit - our greatest distance from the sun this year - at the weekend. Astronomers call this moment aphelion, writes Ian Griffin.

If you do anything this week, get up early and enjoy the sight of Venus and Matariki in the pre-dawn sky, writes Ian Griffin.

As we head towards winter solstice on June 21, sunrise is steadily getting later each day, writes Ian Griffin in Skywatch

For the past few weeks, I have had enormous fun observing Jupiter, Saturn and Mars, all of which are high in the sky in the run-up to dawn. While getting out of bed at 4am can be a bit tiring, any...