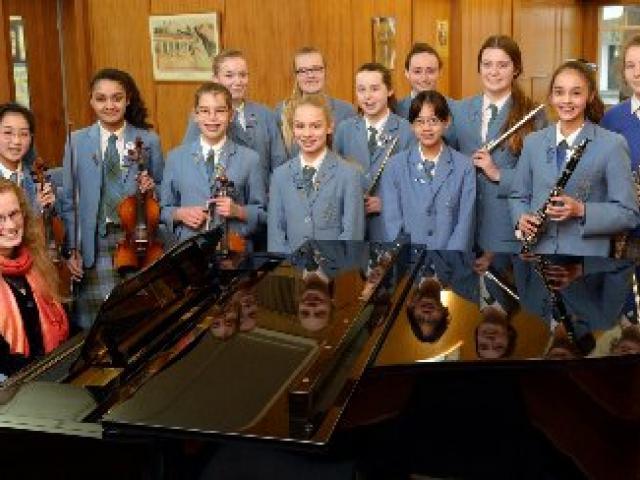 Young Dunedin musicians have been tuning up for the chance to hit a high note.

Sometimes history can be just words on a page.

They were mates at Heriot Primary School, parted company, and renewed their friendship as boarders at St Hilda's Collegiate.
1844: a young boy by the name of Jenkins, the son of a penurious fisherman, gingerly made his way down towards the river.
A dark blanket lurks, closing in on the edges of the twinkling city, while the bustle and chatter, buoyant, rises unafraid, to meet it.
It's faster to walk

The St Hilda's Collegiate School Board of Proprietors has bought a historic Heriot Row property to expand the school's premises, but as yet, it has not been decided what it will be used for.
Dunedin pupils have fared well in an Australasian education competition, with St Hilda's Collegiate School winning the top school and a Columba College pupil winning the top individual award.

Tolcarne House manager Reany Rust views progress on the extension to St Hilda's Collegiate School's Tolcarne boarding residence. The new facility will include an independent living module for year 13 pupils and a supervisor's flat. Construction is expected to be completed in December, and the residence is expected to be ready for use at the start of term one next year.

Rodeo is not a sport offered pupils at St Hilda's Collegiate School. It is doubtful if it is encouraged at any girls school in New Zealand.

"Let's do this." Those were Lily Borren's final words before she handed herself over to two hairdressers during a special school assembly yesterday.

Rebekah Greene (St Hildas) will start as favourite to win the junior girls 1500m and 3000m double at the New Zealand secondary schools championships at Timaru next month.
Rebekah Greene (Hill City), the find of New Zealand junior women's middle-distance running this summer, has proved she can foot it on the other side of the Tasman as well.

Cameron McNoe, of Kaikorai Valley College, reaped the benefits of his two-hour training runs when he won the Otago secondary schools road race in Dunedin yesterday.

Is there something in a name? Kate McDonald doesn't think so, despite winning a New Zealand burger-making competition.

Having a "food conscience" helped secure a Dunedin school canteen a certificate of approval from the Heart Foundation.

A change in roll caps allowing more pupils to attend two integrated secondary schools in Dunedin has left some state schools concerned about a drift of pupils away from their classrooms.