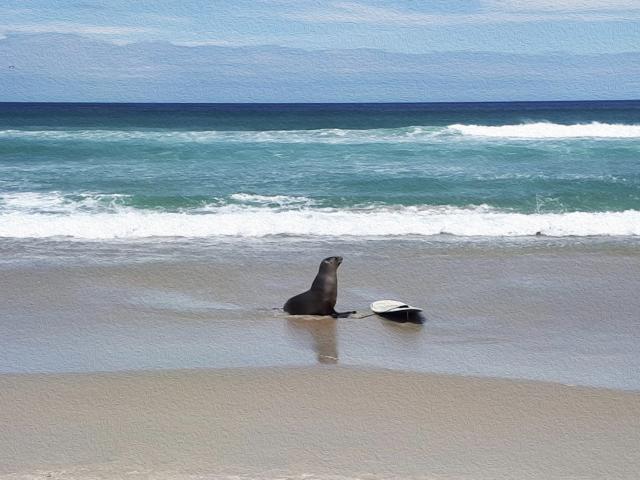 I'm too sentimental. I can find myself thinking, legs flapping either side of my board, that the ocean doesn’t have the water for even half enough tears. But there’s always the next wave and the occasional sea lion, writes Liz Breslin.

Hopes for the future got Liz Breslin thinking about the apocalypse.

I have just had my second Covid vaccination and I am lying in bed watching Wild, Wild Country, a documentary about Bagwhan Rajneesh’s commune in Oregon, a tale of devotion, salmonella and blended beavers, writes Liz Breslin.

It’s funny the things we learn and perpetuate until we take the time to really look, writes Liz Breslin.

As a child I understood that a firm handshake with eye contact was an excellent way to introduce oneself, writes Liz Breslin.

Liz Breslin has a concern. . .

First of all there’s the matter of departure times. Before that, though, there’s the packing, writes Liz Breslin.

I was away from school the day they taught us about logical fallacies, writes Liz Breslin.

I thought it would be easy to find out the definition of "threshold", but it turns out that not even Google really knows, writes Liz Breslin.

A writer’s life. It’s not all ivory towers or garrets with gloves.

Someone made a week for me last week. Well, it was more like some LOTS - the organisers, volunteers, actors, directors, costumers... everyone who came together to make Dunedin Fringe Festival, writes Liz Breslin.

"They called you ‘Famous Hawea Writer Liz Breslin’," said my girlfriend. Who did? Am I? After I got off the phone I got under the duvet and stayed there a while.

I was planning to write about the train. I had an excellent time on the train. Everyone, IMHO, should take a Sunday trip on the Seasider and nobody should open their emails afterwards. And they...

There’s a stretch of road leaving Wanaka where if you look to the left you see small square boxes floating on the lake, and to the right you see THIS IS A WORK SAFE WORK SITE FOR SALE, writes Liz Breslin.