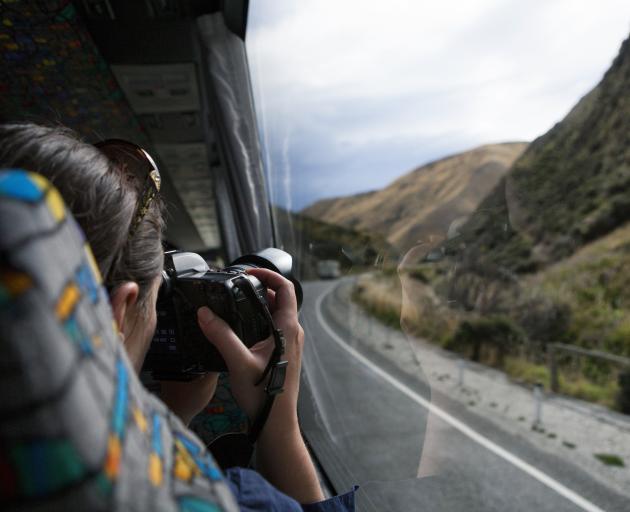 File photo: Getty Images
First of all there’s the matter of departure times. Before that, though, there’s the packing. When you’re taking the bus across country from Dunedin it’s not like you can leave anytime you like with the extra pair of boots thrown in the back at the last second, just in case. No. You need to be 10 minutes’ early, leaning against the wall next to bus stop K, your last-minute supermarket snacks shoved into your tote bag next to your smugly remembered bottle of water.

If you’re lucky, you’ll get a window seat. If you’re even luckier (chances enhanced by an air of unsociability) you get to stretch out into the aisle as well.

As luck and your mismatched pink and purpled plastic knuckleduster earrings and headphones would have it, you have a window seat and the aisle. You have a podcast, your book and the view. Dunedin, receding in the afternoon light, is not as captivating as Eileen Myles’ Cool for You and you’re in Waihola before you know it. The people two seats ahead of you have been taking photos out of the window. You remember you have a phone but you haven’t heard from it in a while. When you check, it says you will not receive messages while driving. You’re not driving, you tell it, and enter your code to prove you’re you.

The people two seats in front of you are still taking photos out of the window. Your mask is getting itchy and your glasses are all steamed and you weren’t listening to the briefing because you were multitasking with your podcast and your book but you remember from the plane that it’s OK to take your mask off to eat. You have cheese twisties in your bag. The person across the aisle is eating cubed pieces of five kinds of different fruit out of a Tupperware box with a metal fork. Your twisties are 63% local or is it 63% natural and definitely 100% gluten free so basically health food. Also, they are delicious.

You see the snow before the twisties are 63% consumed. Patches of it cling to dank paddock sides between the turnoff after Milton and that stretch before Lawrence. You know this road so well, you’ve been driving it 20 years. How often do you get to sit and look? The people two seats ahead of you take photos of the snow. As you head through Lawrence and out into the rolling hills beyond (rolling hills being a two-word eye spy you’ve never forgotten from around these parts) they take photos of the sheep. It’s a long time since you’ve paid attention to this mega-abundance of sheep. Your podcast has finished and so are the twisties, though you shake the bag over your open mouth to make sure.

Snow in May never stays, said a driver to you in June. But it’s July now and snow has been playing colour-by-valley on the hills since about Ettrick. The people two seats in front take photos.

You follow the river. Roxburgh. The 10-minute halfway stop. If this was the morning and you were travelling the other way, you would get a raw (so basically health food) vegan (see) caramel slice from that delicious coffee shop opposite the singing toilets. Because the shops are closed, you walk, shivering, up and down the street, read the sign about the skate park again and get anxious about the bus leaving without you while the toilets croon to you. Actually they only synthesise the tunes, but you hum the lyrics. What the world needs now is love, sweet love.