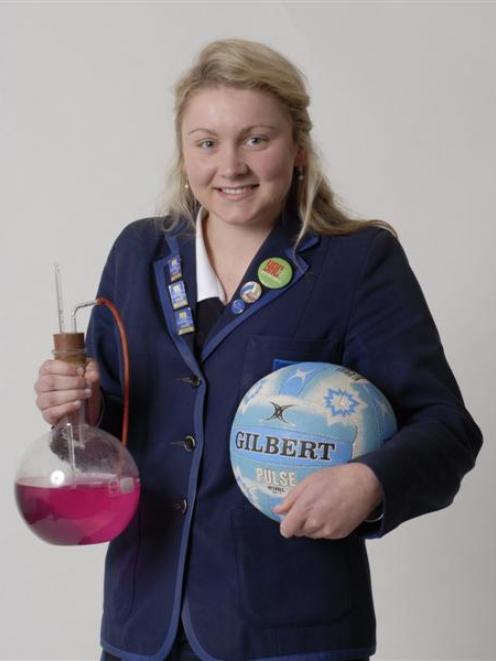 Kirsten Ward-Hartstonge
"I don't like to fail. My greatest challenge this year has been giving enough time to each of my pursuits to make sure I don't fail.''

Taieri College head prefect Kirsten Ward-Hartstonge (17) says her increasingly busy lifestyle and her fear of failure has meant she has become a master of time management.

And she needs to be. In addition to being a peer mediator, sports council member and social committee member, Kirsten is a successful academic with a passion for sciences.

She has received academic Blues awards for the past two years.

She was first in mathematics, chemistry and biology last year, and attended the Rotary National Science and Technology Forum earlier this year.

Kirsten plans to channel her science strengths into health sciences at the University of Otago.

She hopes to forge a career in either nutrition or laboratory sciences.

Adding to her busy weekly schedule is her dedication to netball, basketball and volleyball.

On top of that, last year she was a Dunedin Netball Centre U17 representative, a member of the Bush Road South Island Netball Tournament team and an Otago Netball ID Talent triallist.

She was also the Taieri College intermediate athletics and sprint champion in 2007.

Role models: ‘‘People who set themselves goals and methodically work away at achieving them.''

Hopes for the future: To study health sciences at the University of Otago and go into nutrition or laboratory sciences.