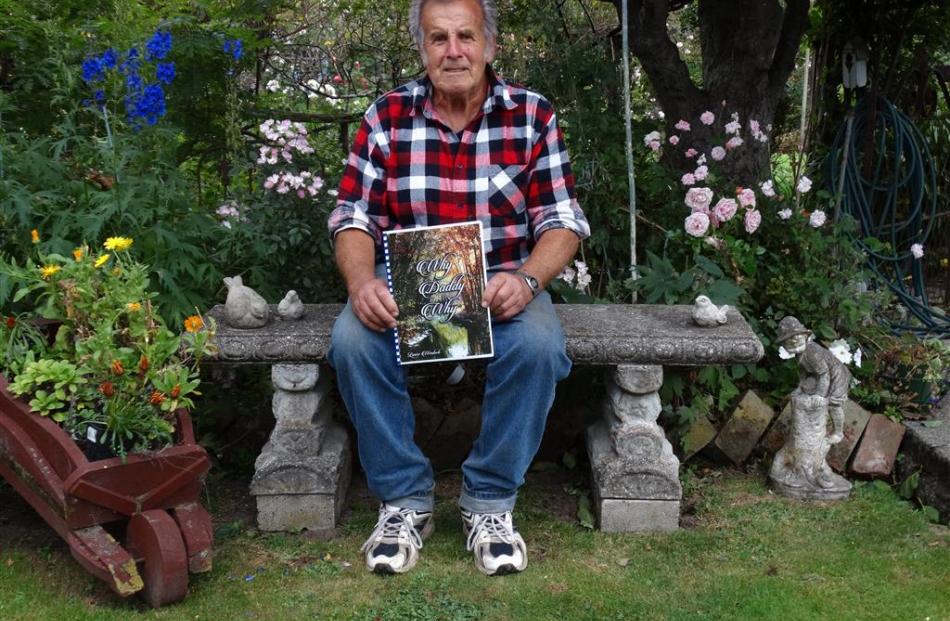 Mosgiel resident Lance Wenlock’s first book, Why Daddy Why, gives a fictional account of a young Taieri man who goes to war. Photo by Joshua Riddiford.

The photograph of an unknown soldier has inspired a Mosgiel grandfather to write his first novel.

‘‘I was round at my mate's place. He was taking lawn clippings to the tip and spied this photo lying in the rubbish and he decided that it shouldn't be there,'' Lance Wenlock, a 76-year-old contract gardener, said.

‘‘He brought it home to his garage. That's where I discovered it.''

Mr Wenlock said looking at the discarded photo provoked serious thought about the impact of war on families.

‘‘I just got to thinking about how it would be for a family to line up and raise a son and see him shipped away in the prime of his life, only to lose him.''

‘‘Why Daddy Why tells the story of Billy, a happy-go-lucky 21-year-old who ships off to fight in World War 2 motivated by a chance to see the big wide world.''

Billy is the apple in the eye of his parents, Frank and Vera, who run a small farm on the Taieri Plain, and Mr Wenlock said Frank's relationship with Billy was inspired by his own close relationship with his children.

He said the book only took him a few months. He wrote it out all in long hand, before friend Sue McSkimming typed up the manuscript.

Mr Wenlock is also a songwriter and the lyrics from some of his songs were included in italics in the book. He said he was strongly opposed to war.

‘‘I can't see the sense in bringing kids up just to see them blown away.''

Mr Wenlock, who has spent much of his life in Mosgiel, said the inspiration for some of the characters in the book came from Mosgiel identities.

‘‘It's written by a local lad about local people.''

The book is available at Paper Plus Mosgiel.