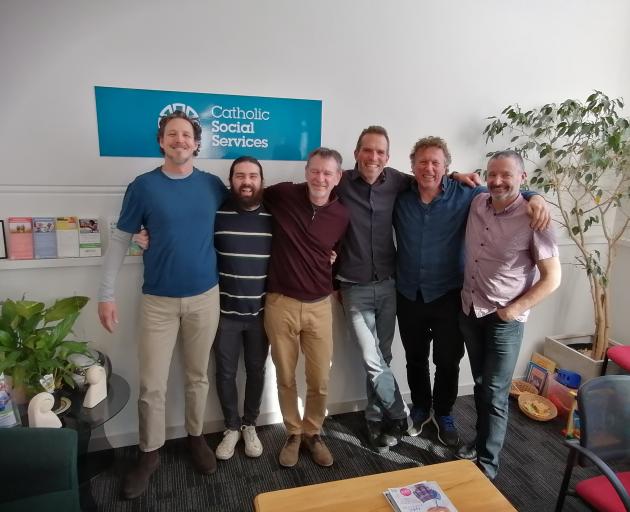 The six-week Game On! programme has been run by Catholic Social Services for the past 15 years, and has worked with about 700 dads from all walks of life across Dunedin.

Game On! co-ordinator Marco Kleinlangevelsloo said the programme was run for dads, by dads, and focused on both parenting skills and discussion of topics of importance to dads.

‘‘Our participants come from different walks of life, and are at different stages with their kids,’’ he said.

‘‘They can be living family life, or dealing with shared custody issues — having a range of experiences and common goals are what gives Game On! its strength.’’

The course built up over the weeks, covering topics such as what dads wanted for their children and themselves, being a role model/mentor, communication, good nutrition and self-care.

The men came together to talk about real issues and the real challenges they experienced as parents, and to start to form new beliefs about their role as fathers.

‘‘Making connections between the dads in the group, and between dads and their children, is what is most important,’’ Mr Kleinlangevelsloo said.

‘‘Over the years, the dads who have been through the Game On! programme have reported really positive results, both for themselves and their relationship with their children.’’

Along with running four Game On! courses a year, the Catholic Social Services team also provides follow-up where needed, and runs a Game On! 2 programme once a year.

The organisation, which has a strong team of men and women, is also the Dunedin provider for supervised contact between fathers and their children.

As it prepares to celebrate 15 years in Dunedin, the Game On! programme has taken steps this year to share the programme throughout New Zealand.

Dunedin-trained facilitators are starting a Game On! group in Wellington, working through Catholic Social Services, and the next step is to move into Christchurch and Queenstown, Mr Kleinlangevelsloo said.

‘‘We have also trained facilitators in Balclutha and Invercargill, and are presently looking for an agency to run Game On! in those centres.’’

Plans are well under way for a 15th anniversary celebration for the Game On! programme, to be held on October 20, from 5pm at the Catholic Social Services hub in South Dunedin.

The event, which will be a chance for Game On! participants to reconnect and celebrate, will include guest speakers, music, food, family activities, and giveaways sponsored by local businesses.

Registrations are requested for the celebration, to ensure Covid-19 guidelines are followed, please email marco@catholicsocialservices.org.nz