1991: 'Mother of all battles' begins over Kuwait 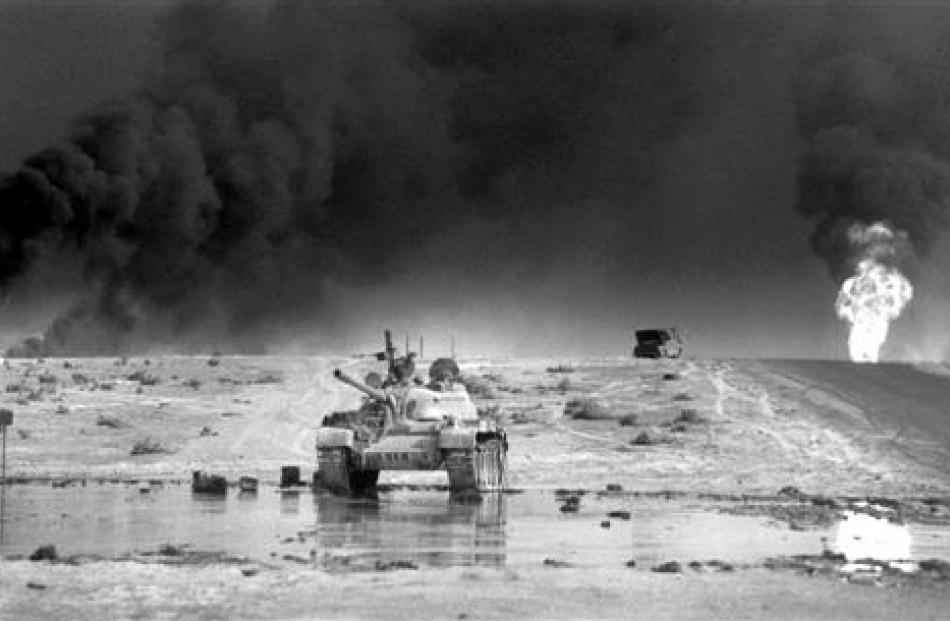 An abandoned Iraqi tank in front of burning oil wells south of Kuwait City, Iraq, in 1991. Photo from Washington Post.

"The battle has been joined," Mr Bush told the American people in a televised address two hours after the first shots rang out at 7pm (1pm New Zealand time). "We will not fail."

The Iraqi leader, Mr Saddam Hussein, gave no sign of giving up, proclaiming on Baghdad radio that "the mother of all battles has started".

The force of the assault appeared to have been so surprising and devastating that there was little resistance from Iraqi air forces, who had known about the possibility of war since Iraq invaded Kuwait more than five months ago.

As a jet roared by with a swish, CNN correspondent Bernard Shaw said: "There is no way you can see an F-16 coming, but after it's come and gone you hear anti-aircraft batteries ... feel the earth shaking under your feet."

Correspondent John Holliman expressed surprise that the raids were happening in daylight.

"Another attack appears to be coming now," he said.

"We hear more than we actually see right now ... rolling thunder ... People are running on the ground where we are."

Mr Saddam broadcast a message to Mr Bush yesterday, declaring Iraq would not yield and calling on him to withdraw United States forces from the Gulf.

Baghdad Radio, monitored by the British Broadcasting Corporation, broadcast the message after a first wave of allied bombing raids on Iraq.

"You imagined that threats will make Iraq kneel. Withdraw your forces and the forces of your allies. This is the only path," Mr Saddam's message said.

A British air force squadron commander said allied casualties suffered in the air strikes were very low, but he declined to specify the level of losses.

Group Captain David Henderson told reporters the waves of air power sent to the "theatre of operation" in Iraq and Kuwait had been extremely successful with low casualty rates.

Initial reports suggested the attacking aircraft from the United States, Britain, Saudi Arabia and Kuwait all returned safely to their bases with few, if any, casualties.

There were no reports that Iraq's feared poison gas stocks had been put to use against the troops of the anti-Iraq alliance deployed in Saudi Arabia.

Whether any Scuds had been fired was unclear.

Iraq's pledge to attack Israel, drawing the Jewish state into the conflict and possibly splitting the alliance, also failed to bear fruit.

ABC News said heavy American B-52 bombers pounded positions of Iraq's elite Republican Guard troops. Defence officials, while not confirming the report, said it was too early to tell how bad the damage was to Mr Saddam's fiercest warriors.

"Early reports indicate that there was major damage done to the Iraqi air force. A lot of planes were caught on the ground and destroyed," said one official.

One estimate was that a minimum of 18,000 tonnes of bombs had been dropped.

The air onslaught paused as the United States told an emergency meeting of Nato in Brussels that Iraq could still avoid further destruction by pulling out of Kuwait immediately. "The goal of these operations is not the destruction, occupation, or dismemberment of Iraq," a statement said. "It is the liberation of Kuwait."

Without an Iraqi surrender, the next task facing the United States-led coalition of Western Arab nations was neutralising Iraq's 545,000 ground troops dug in well in defensive positions in southern Kuwait and Iraq.