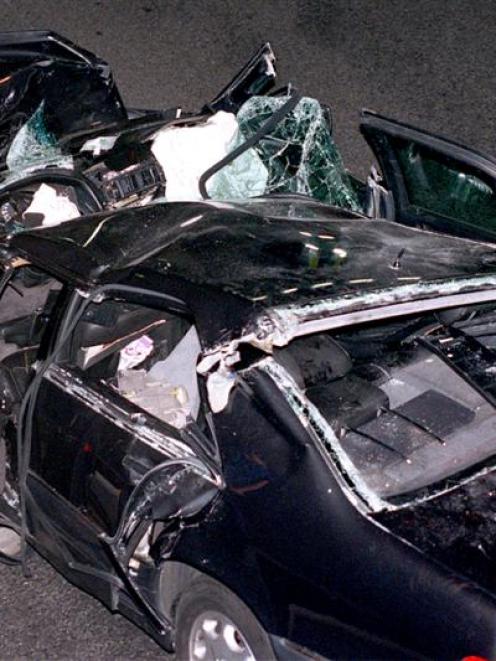 Surgeons fought for hours to save the princess, cutting open her shattered chest, closing a wound in the major vein between her heart and lungs, and massaging the heart for two hours in an effort to make it pump.

Three and a-half hours after the crash, all hope was lost for Diana - the world's most photographed woman, divorced wife of Heir to the British Throne Prince Charles, campaigner against land-mines, the woman who wanted to be the "Queen of People's Hearts".

The photographers were taken to crime squad headquarters on the Quai des Orfevres at 6am (4pm New Zealand time) and were being questioned by a team of detectives.

They were all French nationals.

Earlier, French Interior Minister Jean-Pierre Chevenement said the driver was thought to have lost control of the car while being pursued by press photographers.

The black Mercedes-Benz in which Diana (36) and Mr Al Fayed (41) were riding, after dinner at the Al Fayed-owned Ritz Hotel, smashed into a pillar in a road tunnel under the Place de l'Alma in the Eighth District.

The front of the car folded like an accordion, its bumper driven back almost to the windscreen.

The driver of the car, a Ritz security guard, was also killed.

The fourth person in the car, one of the princess' bodyguards, was injured and freed from the crushed wreckage by rescue workers who cut the roof open from stem to stern.

A badly damaged motorcycle was also taken away from the accident scene.

Prince Charles was telephoned with news of the crash at Balmoral Castle, the Royal Family's summer home in the Scottish Highlands. He broke the news of the princess' death to their sons, Princes William (15) and Harry (12).

Princess Diana died on the eve of a conference in Oslo at which about 100 countries will try to agree on a treaty to ban anti-personnel landmines - her favourite cause, for which she travelled to war zones in Angola and Bosnia.

Princess Diana and Mr Al Fayed had been the focus of frenzied media attention for the past month after photographs showed the pair embracing on a holiday in the Mediterranean.

Only last week, Diana lashed out at the press in an interview published in the French daily newspaper Le Monde.

"The press is ferocious," she was quoted as saying.

"It pardons nothing. It only hunts for mistakes. Every motive is twisted, every gesture criticised.

"I think that in my place, any sane person would have left (Britain) long ago. But I cannot; I have my sons."

British Foreign Secretary Robin Cook, who is on a tour of Asia, told reporters in Manila that "It will be doubly tragic if it does emerge that this accident was in part caused by the persistent hounding of the princess and her privacy by photographers."

British Prime Minister Tony Blair said he was "utterly devastated" by the death of the princess.

"The whole of our country, all of us, will be in a state of mourning. Diana was a wonderful, warm and compassionate person who people - not just in Britain, but throughout the world - loved and will be mourned as a friend," Mr Blair said in a statement.

The accident took place about 35 minutes past midnight (10.35am New Zealand time) in the tunnel at the Place de l'Alma, across the Seine River from the Eiffel Tower.