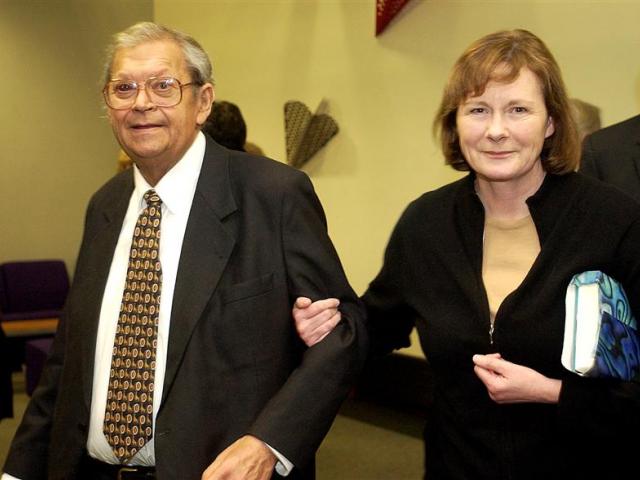 There are more than 80 references to Margaret Pope in Michael Bassett's monumental (and self-serving) account of the fourth Labour government (Working With David, Hodder Moa, 2008). In excess of 30 refer to what Bassett describes as her "influence" on the then prime minister, David Lange.

New Zealand has had little to do with Henry Kissinger, nor he with us.

Yvonne Rust (1922-2002) holds a position in New Zealand fine arts matched by few other teachers. She was a potter of considerable ability, but cannot be listed in the first rank; she was also a painter of originality, but made no claims to a place in the pantheon.

There's been quite a fuss during Pamela Stephenson-Connolly's visit here to promote her latest book, Sex Life (Vermilion), and I expect by now at least some readers will have waded their way through its 472 pages of cradle-to the-(almost) grave narrative.

Judy Golding daughter of the Nobel Prize-winning British author William Golding, quotes the proverb "The children of lovers are orphans" at the beginning of her memoir, and it certainly becomes apparent as one reads of the catharsis that prompted it.

Michael King's books enjoy a rare status among our writers. He managed to become both a reputable historian and the author of popular histories and biographies. His relatively early death, along with that of his wife, in a car accident in 2004, deprived us of a major literary figure.

Subtitled "The boy who went to war", Wolfram provides a perspective on World War 2 sufficiently rare to be exceptional.

Does anyone read H.G. Wells these days? I have my doubts, yet a century ago he was Britain's and probably the world's best-selling novelist.

There are doubts even today about which Leningrad Dimitri Shostakovich had in mind when he wrote his seventh symphony, the so-called "Leningrad" symphony.

Picture, for a moment, the sitting room of a house in New Plymouth, 40 or so years ago. There is a memorable aroma in the air outside because the house is downwind of that Agent Orange perfumery, Ivon Watkins Dow.

A recent correspondent to this newspaper, a former emigrant now living in Sydney, noted that his family felt that a house divided cannot stand - and so we left New Zealand.

Sue Orr had a bright, if challenging, idea for a book of short stories: why not use them to echo short-story masterpieces of the past, while dressing them in contemporary New Zealand clothing? The result is substantially good.

Small-mindedness, ever present in so many aspects of New Zealand life, has made no exception of cultural matters.

This is the first full-length study of one of this country's most important political figures, its most significant legislator, and a former prime minister.

Historian Gavin McLean has written or edited some of the most attractive of local histories over many years, and his latest, Historic Otago (Bateman, $69.99, hbk), has appeal for any reader interested in photographic history.

OUR KIND OF TRAITOR John le Carre Viking, $40, pbk It is 50 years since John le Carre - David Cornwell - published The Spy Who Came in from the Cold (his third novel), one of his best in a...