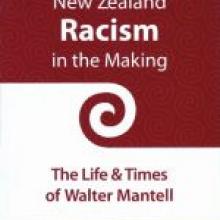 A recent correspondent to this newspaper, a former emigrant now living in Sydney, noted that his family felt that a house divided cannot stand - and so we left New Zealand.

It is a sentiment much more widely held than I think some of our politicians may believe.

These four books under discussion have a bearing on that divided house and its prospects.

Walter Mantell is little mentioned in general histories of New Zealand, yet, as one of Governor George Grey's fix-it men, he deserves a far closer look, and Harry Evison's curiously-titled biography, New Zealand Racism In The Making does the job.

Mantell was hired in 1848 to settle the reserves allocated by the Government for Ngai Tahu in the South Island, an act of thievery for which more than a century passed before a degree of redress was achieved.

But it was a theft repeated all over the country and the anguish from it remains to this very hour one of the chief causes of our divided house. But Evison's book is also something of a divided house.

Mantell, English-born in 1820 and the son of an eminent scientist, though a prospective surgeon abandoned all at the age of 19 and sailed to Wellington in 1840 as one of our first colonists.

After a somewhat idle start he managed to get himself noticed by Grey through his science background and shared interest in our flora and fauna.

Mantell had by 1851 become reputable for discoveries in fossils and moa.

With the arrival of more settlers it became official policy to remove local Maori from where they occupied good land and Mantell become involved, first as a Maori land purchase commissioner where many of the deals he arranged were outrageously favourable to the administration, and later at the height of the confiscations, as a politician.

Evison, to whom we, and Ngai Tahu, owe an immeasurable debt for his decades of research into South Island land issues, has no illusions about his subject.

He quotes the example (one among many) of Mantell's modus operandi, when he promised Maori schools and hospitals in return for signing his land deeds but had no power to do so and did not of course deliver, and then literally forged the receipts.

On and on the sorry record goes, traced in large part because Mantell kept virtually all his papers, which have been thoroughly rummaged by his 21st-century biographer.

Mantell died a hero, at least in the eyes of the settlers who had gained the greatest benefits from his activities.

Yet, Evison argues, he was a systematic liar, a forger of official documents, a confidence trickster and a principal cause of the poverty into which landless South Island Maori soon descended.

I challenge anyone to read this biography and emerge thinking Mantell still the unintentional instrument of negotiating with the natives under false pretences, as one of his admirers claimed in 1897.

As for Evison's wider compass, I am not convinced that this was the book upon which to hang the causes of the racism that still divides us.

Certainly, in his subject's activities and the policies of his masters, together with the attitudes of the colonists and their organisers, may be found much that seems to be inherent today, although on the non-Maori side likely to be less open than it once was; but it is not all one-sided by any means.

Perhaps because he is now in his mid-80s, Evison felt a separate book on the making of racism beyond him; better to let readers judge the matter through the character and actions of his subject.

He notes that not until 1955 were primary schools issued with bulletins (written by a couple of Dunedin historians) which gave a balanced account of Maori aspirations and religious beliefs; not until the 1960s were race relations taken seriously here after the Hunn report was published; and not until 1981 was the Treaty of Waitangi Amendment Act passed, creating the Waitangi Tribunal - and Maori was only recognised as an official New Zealand language in the 1990s.

All of the above has happened in my own lifetime.

There is a great deal more to do but, as Evison cautions, racism may indeed be part of human nature and may never be eliminated.

"But at least in New Zealand in 2010, at the time of writing, racism is officially frowned on and discouraged."

The State of Maori Rights.

No impartial academic, Prof Mutu has been and continues to be a passionate advocate for Maori.

Her book is a wholly Maori-weighted listing year by year of gains and losses for tribes since 1994.

These annual reviews have been published in The Contemporary Pacific for quite some time, firstly by Ranginui Walker, then by Prof Mutu.

The tone of this book may be indicated by her approach: "Much of what I reviewed dealt with our relationship with Pakeha and the ongoing struggle to free ourselves from their domination, oppression and discrimination."

Prof Mutu also has a take on New Zealand racism, which she ascribes, as does Evison, to the "deeply embedded notion of white supremacy which imbued the incoming British with a belief that they could dispossess Maori as and however they chose."

I have no dispute with the topics Prof Mutu lists and expiates, and open-minded readers will learn a great deal from the perspective from which she represents numerous events and issues.

I fear, though, that the view is occasionally discoloured by her passion and unhelpful in its bias.

Example: "Once the (1996) government was announced, and new members started making their maiden speeches, the mainstream news media embarked on a campaign of discrediting each member of the house who was Maori, both new and old. They were baying for Maori blood and every whiff of it sent them into a frenzy."

This is arrant, embroidered, conspiratorial nonsense.

An Identity for New Zealand?, although it is a worthy and well-meant effort.

Mr Collinge, who some may remember was once our high commissioner in London, suggests blame for our racism lies with the British colonial office which left land issues to settlers who were more imbued with land acquisition than with the enlightened protection of indigenous peoples, but "given the distance and difficulties of communication and governing from afar, that is overly harsh and no logical basis for disregarding the British contribution ..."

Mr Collinge has great admiration for the colonists and the energy, innovation, values and spirit most brought to these shores, and believes at least some of these ought to be resurrected to inspire new generations.

He quotes numerous examples but seems uncertain in his conclusions.

"It is correct to say that New Zealand's Maori heritage is a distinguishing characteristic but wrong to classify it as predominant or to describe the country as a whole in that way - it is not realistic to fashion an identity from a minority.

A society combining Maori and New Zealand influences ... might well be the basis for a separate identity in future and the considerable intermarriage between Maori and Pakeha suggests that it might in due course."

We must bear in mind that this is the Pakeha perspective of the day, when the new society to be created was entirely mono-cultural.

"In mid-Victorian settler society there were those who at the time recognised and spoke out about injustices and failures to bring Maori and Pakeha together in a bi-cultural society. But for most colonists most of the time the focus was on what they were creating for themselves."

The mid-1800s was also a time of great reform across international society, and the opportunity to build Utopia in our wilderness had many theoretical attractions.

Crucially, too, private associations founded all the main settlements other than Auckland - the true source of provincial rivalry to this day.

The selection of commentaries selected by Wood illustrates some of the reforms and the inevitable conflicts, from the bizarre decisions by some provincial governments, to the destruction of those governments; the breaking up of the power of the wealthier landowners; the wage rates of the deceived labouring classes; and the arrival of the Constitution Act with the celebrations and hopes of what that might mean for the future.

A divided house then as now, with much still to discover about itself.

All four of these books - each bearing some of the deficiencies of the self-published or poorly edited - provide entertaining and arguable perspectives of possible futures.