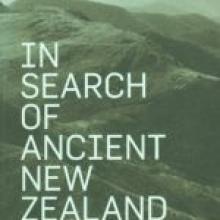 Earthquakes" and "faults" are comprehensive headings in the index of this extremely informative book, with several references to the Alpine Fault.

It was written before the Christchurch earthquakes, yet from it one learns much about the principles.

The map of known (good word!) main faults active within the past 1000 years, or even 100,000 years, might seem to prophesy a pretty clean bill of health for Christchurch, 100km from the Alpine Fault. 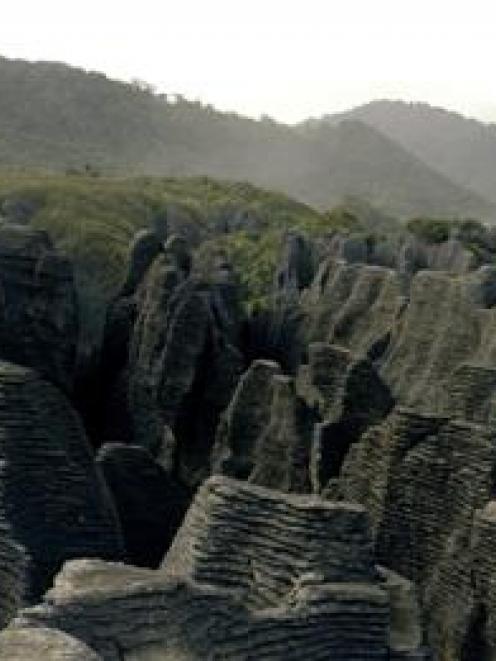 Pancake Rocks, Punakaiki, one of the images from <i>In Search of Ancient New Zealand.</i>
A map of the hundreds of New Zealand earthquakes throughout the 1990s shows relatively sparse activity around Christchurch, although on the other hand the few in the region have been shallow, which as we know all too well, does not mean mild.

A spectacular double-spread aerial photo shows Banks Peninsula centre stage, viewed from above the ocean with the Canterbury Plains beyond. The commentary, referring to the backdrop of the majestic Southern Alps, now seems laden with prescient overtones, ending: "... a great ripple in the Earth's crust, rearing up as a wall of rock immediately adjacent to the collision front with the Australian Plate. This is plate tectonism in action, and is happening before our eyes."

It has happened before our eyes. The map has changed.

Why did it happen? There can be no more superbly reasoned primer than this book, whatever one's level of interest in the topic, to develop some understanding of the stressed, unstable, and most importantly, unpredictable nature of the land beneath our feet.

The power and readability of this excellent work derives from the interweaving of the evidence, geological, biological and physical, into a coherent story stretching back half a billion years to the supercontinent of Gondwanaland that later spawned modern New Zealand and Australia.

The evidence is clear and persuasive, particularly in the photographs ranging from satellite and aerial, down to sedimentary layers, fossils, tiny crystals and microscopic algae.

Western Australia's more than 4 billion-year-old (BY) zircon crystals have held centre stage for so many years as among the world's most ancient isotopically dated rocks that it was a surprise (to this uninformed reviewer) to learn that New Zealand has zircons more than 3 BY old.

The unsolved mystery of how they reached their resting place on the Three Kings Islands, which does not match the Australian process, is intriguing.

The authors' major focus is on what happened after Zealandia - itself a matter of definition - separated from the remains of Gondwanaland, essentially Australia and the Antarctic, a relatively recent 83 million years (MY) ago.

Strong evidence suggests our land sank steadily until much was submarine about 23 MY ago.

Then it began to rise, aided by the conflict between the Australian and Pacific continental plates.

This is not speculation but is based on sound evidence, including sedimentary rocks and the types of fossils found in them throughout much of New Zealand.

The high profile of New Zealand geological and palaeontological research, and of the many personalities involved, is well explained and beautifully illustrated, making this book a gem, if a sadly topical one.