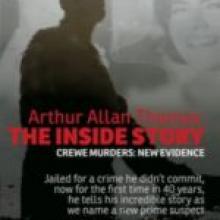 Forty years on from June 17, 1970, the day Harvey and Jeannette Crewe were murdered in their Pukekawa farmhouse, it is hard to believe there is anyone with the smallest knowledge of subsequent events that believes the killer was Arthur Allan Thomas.

As a reporter in England and New Zealand, I had covered murder trials and I cannot recall questioning a jury decision but the first Thomas murder trial guilty verdict astonished me because the Crown had presented virtually nothing to connect Thomas with the crime and what little had been presented reeked of contamination.

My bewilderment, shared by many of my colleagues, continued through the second trial and the various appeals.

There was a collective sigh of relief when, after nine years in jail, Thomas was pardoned and freed, and more than a few cries of "I told you so" when a royal commission of inquiry not only exonerated Thomas but pointed at police corruption, jury tampering and the planting of false evidence.

For most of us, that was that.

The authorities announced there was insufficient evidence to prosecute the policemen named in the inquiry report, Thomas was paid compensation - risible, but enough for him to buy a property and resume farming - and the subject of the Crewe murders vanished from the public mind.

In retrospect, it seems strange that with the double murder unsolved, further inquiries were never pursued by a police force whose reputation as the guardian of public morals was crumbling badly.

The Crewes had a baby, Rochelle, who survived the murders in strange circumstances, and one cannot but sympathise with her that four decades later, the murder of her parents is not only unsolved but nothing has been done to salvage even a shred of justice for her and the many others who suffered immeasurable harm as the police bludgeoned basic human rights across a broad swathe of the Waikato area.

It is a story begging to be told and more than a few journalists, including the redoubtable Pat Booth, who devoted his life to campaigning for Thomas, have poured out articles, books, TV documentaries and even a film.

It will surprise no-one that reporter Ian Wishart should join the frenzy with a book that claims to present the "inside story" of events and goes further to provide what is grandly described as "new evidence".

Wishart's journalism has often been of the scattergun variety: blast off enough shots and you are bound to hit something.

The result is a lack of focus.

At one point, Wishart complains the media failed to get the Thomas story right and asserts that "a more complex and nuanced narrative would have been lost on them".

The same criticism applies to this book because the author cannot seem to decide whether he is telling Arthur Allan Thomas' personal story or using his powers of imagination - Wishart would probably prefer "intellect" - to solve the double murder.

He certainly makes a good fist of presenting, in condensed form, the copious information about the discovery of the bodies, the unfolding murder investigation, Thomas' arrest and trials and subsequent pardon, all interwoven with mawkish quotes from his own interviews with Thomas and "lovable rogue" stories about Thomas' adventures in jail, his love life and his later misadventures as a pilot.

Thomas' innocence has not been in doubt for many years, so Wishart can add little; he is merely turning over old soil.

He does a better job detailing the probable innocence of the other man the police suspected, Jeannette Crewe's father, Len Demler.

And Wishart makes his strongest point when he argues that by fixating on an either/or scenario involving Thomas and Demler, the police deliberately closed their eyes to the possibility of other suspects.

Then Wishart muddies the waters by producing an anonymous informant, who claimed to have given police information pointing to another possible suspect, an itinerant contractor with a devoted sister, who could have been the mystery woman caring for baby Rochelle in the critical five days before the discovery of the murders.

Wishart delves at length into this unauthenticated story which, the informant claims, was passed to one of the Crewe investigators, Detective Sergeant Len Johnston, only for Johnston to issue a death threat if the man ever mentioned it to anyone.

Having gone to great lengths to build a case against the itinerant as the possible killer, Wishart then drops that and produces another theory in which, with little in the way of facts but much by way of imagination, he names Johnston, now dead, as being the most likely killer.

Granted, Johnston was the detective who planted the evidence leading to Thomas' arrest and conviction and the man would appear to have been the worst kind of police bully, but Wishart's case is as thin as anything presented in court against Thomas and nor is it in any particular way new, as something similar was posited as far back as 1972.

In the six months prior to the Crewe murders, the police had thrown massive resources into investigating the murder of Jennifer Beard at Haast; it was public knowledge that year's police budget was hopelessly overspent and a big dent had been made in the following year's budget.

As the Crewe investigation went from days to weeks to months and the cost mounted, the message from police headquarters was stark: Get it sorted - now!

What more incentive did a greaser like Johnston need to plant evidence, give his bosses the result they so ardently desired and boost his standing in the force?

It is a better explanation for Johnston's actions - and those of colleagues implicated in the skulduggery - than targeting him as the killer.

So what exactly does Wishart achieve? He has trodden a well-worn path, raised questions that have been asked by many writers before him and rightly points to the ghosts of the case haunting police to this day.

He documents skilfully, though with considerable pathos, the agony of Arthur Allan Thomas and shrills the call of unrequited justice.

Does this book really add anything new? Probably not.

But it is an important reminder of one of the most tragic episodes in New Zealand history when a country lost its faith in the integrity of its police and the incorruptibility of juries.

Geoffrey Vine is a Dunedin journalist and Presbyterian minister.