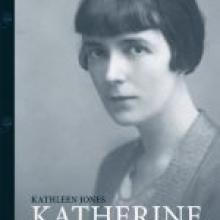 In appearance this book looks very much like a standard fully-documented, fact-centred literary biography, such as Michael King's lives of Frank Sargeson or Janet Frame - conservative hardback format, 524 pages, 40 of them comprising end notes and bibliography.

But in this case the appearances are deceptive, as is evident from the first pages of the text.

The introduction sets the tone - in the first person, opening with the author's impressions of Wellington, including the birthplace and the Mansfield collection at the Alexander Turnbull Library, seeing Wellington as "the atmosphere that formed Katherine, and shaped her own dreams and ambitions".

The introduction also announces one of Jones' primary concerns when she writes of how, after reading John Middleton Murry's diaries in the Turnbull Library, she was able to understand better the man and his "complex relationship" with Mansfield and thus "to unravel the `Mansfield myth' that [his] editing of her work created".

The first section of the biography itself, "Leaving All Fair", begins with the day of Mansfield's death, January 9, 1923, and the days immediately following it.

The present-tense account is almost novelistic, attempting to recreate the speech and the thoughts and feelings of Mansfield, her companion Ida Baker, and Murry during those days.

That re-creation is a patchwork piecing together excerpts from Mansfield's letters and notebooks, the accounts of people who were with her at Fountainebleau, Murry's diary and Ida Baker's diary and memoirs.

The remainder of the first section is made up of "The Husband's Story" - Murry's life in 1923 following Mansfield's death, and "Ida's Story" - an account of Ida Baker's early relationship with Mansfield, 1903-06.

Jones, a professional biographer who has written several biographies of literary women (including Margaret Cavendish, Christina Rossetti and Catherine Cookson) drew on a tremendous range of sources to piece together these accounts.

This is the first Mansfield biography to be able to draw on the full five volumes of Mansfield's "Collected Letters", edited by Margaret Scott and Vincent O'Sullivan (1984-2008) and the full texts of Mansfield's "Notebooks" (2007), as scrupulously edited by Scott rather than as selected, arranged and modified by Murry, as well as on all the unpublished Murry and Mansfield papers in the Turnbull Library and on Murry's autobiography and autobiographical fictions.

As Mansfield and Murry were surrounded by extremely verbal people, there are also essays, letters, poems, memoirs, diaries, taped interviews, and biographical fictions, published and unpublished, by one of Murry's sons, one of his daughters, two of his wives, Ida Baker, D. H. and Frieda Lawrence, Virginia Woolf, Dorothy Brett, Ottoline Morrell, A. R. Orage, William Orton and others who knew Mansfield and Murry.

From these various sources Jones has drawn something like 2000 quotations (there are 1270 end notes identifying sources), most of them brief, woven together into her two primary narratives.

The resultant book, 10 years in the making, gives a vivid, impressionistic sense of the development and interrelationship of two extraordinary lives, with sharp glimpses of others interacting with them.

Their shifting senses of their own selves and of each other and others' sense of them are supplemented by occasional shrewd comments by the author, but there is no sense of any overriding thesis concerning the characters of Mansfield and Murry; rather, we get more a sense of lived process than of analysed "character", and there is no attempt to find a simplified "essence".

Mansfield is portrayed as "a complex woman ... who could at her best be charismatic, funny and profoundly compassionate, but at her worst became a `castatrix triumphans', a raging fury, a savage satirist, and extremely deceitful manipulator.

The `real' Katherine Mansfield was so intensely private and well-defended that not even she could be sure of her own identity".

The different "Katherines" emerge from her quoted letters and notebooks, with her constantly shifting and contrasting views of Murry (and of her earlier loves), of Ida, of marriage, of death and the spiritual life - all intense and convincing, "sincere", but not to be reconciled.

Murry as portrayed in the book is less complex, but not reducible to any simple formula or judgement.

Jones shows his tendency to live in his own head and theories (themselves in constant flux, as his more than 40 published books show), his inability to understand other people empathetically, as his disastrous second and third marriages and his terrible relations with his children reveal, but she also shows his appeal to others (including Katherine and his daughter by his second marriage named after her).

His creation of "Saint Katherine" in his "creative editing" of the Mansfield notebooks can be seen both as an imaginative creation and as an exercise in self-delusion.

Jones, in her introduction, has admitted that she began her research prepared to be critical of Murry and ended "much more compassionate and better able to understand why he had behaved as he did, and way Katherine went on loving him `in spite of all".' The story of his imaginative romanticisation of the dead Katherine and its effect on his children and his three later wives provides a strong secondary narrative interest.

Not a definitive scholarly biography of a single life on the historian's model such as those like King's on Janet Frame or Rachel Barrowman's on R. A. K. Mason or Keith Ovenden's Dan Davin, this book turns out to be an example of the new creative biography dealing with several lives, closer to the novelistic model of James McNeish's Dance of the Peacocks.

It is not the kind of book one would turn back to as a reference source for the facts of Mansfield's life, but rather one to read for its strong impressionistic yet thoroughly researched sense of the relationship of Mansfield and the single most important man in her adult life, a relationship that lasted long after her death.