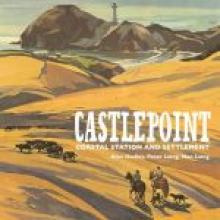 When researching the history of publishers A.H. & A.W. Reed a few years ago, I was reminded of our rich heritage of sheep stations.

Molesworth and Blue Cliffs were just two of many places highlighted by Reeds and other New Zealand publishers that have contributed to an earlier generation's sense of national significance.

Castlepoint is an equally iconic locality.

Even if you have not gone there, you have probably seen a postcard or television programme of the beach's unusual reef, of the lighthouse and of the annual horse races along the beach.

Not quite Milford Sound or Rotorua, but up there with Kaikoura or Akaroa.

Alex Hedley brings this community alive in an elaborate and attractively produced book.

The Wairarapa-based Hedley heritage of book selling and book publishing shines through a publication that's a world away from the average local history.

So what does it serve up?

Hedley has written the bulk of the book.

Although his annotation is light, he covers everything from geological and Maori beginnings through to the evolution of the sheep station, the growth of the community and the history of ancillary activities such as fishing and the lighthouse.

Postwar managers Peter and Nan Laing provide extensive break-outs on aspect of farm life and development, everything from the drunken seasonal workers through to the nuts and bolts of making a profit from this wind-blown place.

It's a good case study of the rise and fall of postwar pastoral farming and of New Zealand farming's remarkable transformation to an unsubsidised diversified existence.

Farmers are not the only players in this story.

Like many local communities, Castlepoint also depended on small traders, fishers and the postmasters and lighthouse keepers whose children kept the school and other community enterprises afloat.

Will this North Island local history appeal to southern readers? I hope so. Hedley has amassed a pile of pictures, diary extracts and texts to tell the story of a place that's both special to locals and of interest to the rest of us.

- Dr McLean is a Wellington historian and reviewer.