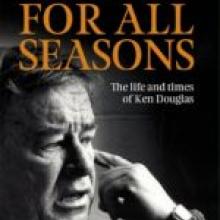 MAN FOR ALL SEASONS
The life and times of Ken Douglas
David Grant
Random, $45, pbk

Politics can be a nasty business.

No-one in New Zealand during recent decades has had more personal experience of this nastiness than the subject of this biography, Ken Douglas.

Writing it while the subject still lived was sensible, as he was given the chance to oversee it.

Thousands of details would not otherwise have been available.

But it was also very risky because so many people were given cause (or perhaps just thought they were) to hate him.

This is not a critical biography.

There are a few warts revealed but generally it is a very favourable view of his life.

And life as a leading trade unionist was not a bed of roses for those involved.

They served as targets for those unwilling to look closer to home for the ills of society.

They also served as scapegoats for the many politicians seeking to avoid responsibility.

Some of the responsibility of this must rest with the trade union leaders themselves.

The many photographs of them in this book are of unsmiling bully-boy thugs.

The trade union movement was riven by divisions and factions.

This book gives a very good picture of that, although Douglas himself is its main focus.

He built Chinese walls between Douglas the leader of the Socialist Unity Party and regular visitor to Moscow to worship at the shrine of Marxist orthodoxy, and Douglas the fighter for the rights of the union members whatever their personal beliefs.

He was always rigorous over that division and those who worked closely with him came to recognise and accept it too.

But it was not understood by the wider public.

So Robert Muldoon, Roger Douglas, Bill Birch, and many lesser figures, were able to traduce and vilify him to the uninformed general public.

When trade union power was eventually dismantled by Birch in the Employment Contracts Act, it was done with widespread public acceptance.

This book will leave the reader doubting that Douglas ever understood the damage his sincerely held communism did the trade union movement, or understands it now.

As an ordinary citizen he had the right to any beliefs he chose.

There was nothing covert about his communism; it was quite open.

But the pro-American slant of New Zealand after World War 2 made communism anathema here.

The failings of Joseph Stalin were far better known than those of Joseph McCarthy.

Appearing pro-Russian rather than pro-American was self-defeating.

The Labour Party of the 1950s and '60s held no appeal for potential radicals.

The early chapters are the best account of late-19th and early 20th-century New Zealand life I have ever read. (Presumably Douglas himself was the major contributor here.)

Because there was a long family record of labouring, there was no expectation Douglas would benefit from going to a school with such a good academic tradition as Wellington College.

He wasted his educational opportunities.

So he became a labourer, and then a driver, and in his mid-20s a trade unionist - an astonishing achievement in a field dominated by angry old men.

He was a prominent unionist for more than 40 years.

He could be angry, but unlike F. P. Walsh, Tom Skinner and Jim Knox, his main predecessors, he understood the difference between governance and management.

They fought the bosses and the State; Douglas did too, but mostly he tried to fight the system.

He believed the interests of his members would be best served by wage negotiations conducted on a level playing field.

This led his power base to shift from blue-collar to white-collar unions, and his leading role in changing from the Federation of Labour (FOL) to the Council of Trade Unions (CTU).

Probably only a man (certainly, only a man), who led the one could have become the leader of the other.

He had three major opponents.

It was Muldoon whose innate nastiness led him to brand Douglas as "Red Ken".

That was Muldoon's way, to attack the man rather than the ideas.

In fact, Muldoon came to respect Douglas and, from this length of time, it is astonishing to learn that Muldoon offered Douglas a prominent spot in his Prime Minister's Department.

Sensibly, Douglas declined, but it was a genuine offer.

It was said at the time of Rogernomics that never had the ancient and warlike house of Douglas been so divided against itself.

But Ken and Roger had more in common than just a shared surname.

When they met them and got past the isms that drove their lives, people actually liked them.

The Lange Labour Government was not anti-union and granted most of the FOL's wish-list.

It was over ideologically-driven economic theory that they fell out.

Birch acted out the theoretical underpinning of Muldoonism.

Once the playing field had been tipped too far, the rough trade union dominance of much of New Zealand life was over.

This book shows that Douglas had long feared such an outcome and had tried to prepare for it.

It was indeed just as well for trade unions in New Zealand that under him the transition to the new environment was possible and, so, relatively painless.

Douglas will be remembered as a union man.

He was also a lot of other things.

He was a fanatic golfer as well as rugby supporter and player, coached/managed a succession of junior sides in both codes, and ended up on the rugby union board.

He was a significant local body politician on the Porirua City Council, and in health administration.

His union work led to important roles with the International Labour Organisation.

There was a great deal else, too.

How did he ever find the time for it all?

The enduring image will be physically unkempt, overweight "Red Ken" with his penetrating voice, using his innate intelligence to serve his union members, and making friends in all walks of life.