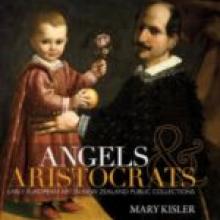 People fortunate enough to live in Dunedin or to have regular access to its attractions will be well aware of the outstanding collection at the public art gallery of pre-20th-century European art.

I know of none with greater historical value in New Zealand, so when this book landed on my desk my reading of it turned into something of a journey of discovery.

Subtitled "Early European art in New Zealand public collections", it provides a survey of paintings of which, as a casual visitor to the public galleries in the other main centres, I had previously had only a taste.

(Whanganui's collection is also included, since this is the only provincial gallery which - despite former mayor Michael Law's plebian observations - has several significant historical works.)

Mary Kisler has provided a well-written, engaging narrative which commences with brief descriptions of the galleries and their collections and how they came to acquire them, and then moves on to discuss selected works in the context of themes.

Thus, she begins with religious works, choosing as her first illustration the wonderful painting of St Anne, circa 1470, held in the Auckland collection and purchased as recently as 1966; further, Machiavelli's Madonna and Child, one of the greatest works in the Dunedin collection, is given star treatment, as are several others of the group.

Throughout the text, each chosen illustration is discussed and placed in the context of the times.

In the section on landscape, for example, scenes both real and imagined are illustrated and their purpose explained, including I'm glad to note, William Hodges' view of Dusky Bay with its "noble savage" dominating the foreground.

Imaginative paintings and still lifes occupy another section, greatly enhanced by a fine reproduction of the Auckland gallery's village fair painting by the younger Bruegel.

The chapter on portraiture seems to me to be the high point of the book, again including several examples of the Dunedin collection including my two favourites: Gheeraerts' stunning picture of the Countess of Dunfermline and Allan Ramsay's penetrating study of Edward Kynaston.

Examples of techniques other than oil painting, including prints, sculptures and drawings, are scattered throughout the book, as are illustrative details of key works - essential for any understanding of painting.

Of course, in any book of this type there will be argument about what is in and what is not, but I believe readers outside Otago will be very surprised at the range of chosen examples from the Dunedin collection, and Dunedin readers might be startled by the quality of some works held elsewhere - not all of it by any means admirable.

The text is supported with extensive notes, thumbnail reproductions of other qualifying works from the various collections, brief biographies of the artists, a bibliography and an index that is limited by its focus on names.

The quality of the reproductions, so far as one can judge, appears to be excellent.

If I have a quibble with the text - it is both extremely informative and scholarly - for lacking the kind of opinionated flair that would have lifted it among the foremost of New Zealand art books, it is relatively a minor consideration.

Bryan James is the Books Editor.