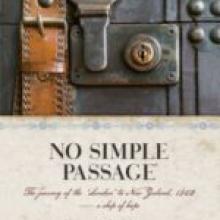 NO SIMPLE PASSAGE
The journey of the London to New Zealand, 1842 - a ship of hope.
Jenny Robin Jones
Random House

At first glance, the title might suggest just another account of the long and hazardous 19th-century sea voyage from the United Kingdom to New Zealand.

It certainly does offer an account of the four-month voyage of the emigrant ship London, but in this instance by the author who "stowed away" with her great-great-grandmother Rebecca Remington.

The account is based on the journal maintained by the ship's surgeon and on another kept by a cabin passenger.

Jenny Robin Jones offers a detailed account of the dangers and privations endured by the passengers, among them the poor shipboard diet, disease, and birth and death.

But at least as interesting as the account of those trials and travails endured by the 258 emigrants are the accounts of the lives of some of those who, once ashore in New Zealand, set out to make their way in the New Zealand Company's settlement of Wellington.

By such means the author compares the hopes and aspirations shared by the migrants with the stark challenge of establishing homes and making a living in an alien and occasionally threatening land.

The author examines some of the key events in the early history of Wellington, including what she terms the "Wairau Debacle" (originally known as the "Wairau Massacre" and latterly as the "Wairau Affray") and the heightened tensions which ensued in Wellington.

She explores other aspects of the relationships between settlers and Maori, follows the fortunes and misfortunes of some of the new arrivals, explains the growing tension between Wellington and Auckland as the Crown colony government extended its reach to the "southern settlements", and describes the efforts by some to maintain the rigid social distinctions of England and equally the disposition of others to ignore them.

Sharply drawn are the contrasts between the immediate efforts to re-create familiar elements of English life in the form of races, balls, and theatre on the one hand, and the poor housing and high levels of violence and drunkenness on the other.

Also canvassed are some of the problems which dogged the Wakefieldian settlements - too few "capitalists", lack of employment, settlement plans imposed on unforgiving terrain, and, in the case of Wellington, what Bishop Selwyn described as "the elastic tone and perpetual motion of the atmosphere".

The London arrived in Port Nicholson on April 29, 1842, and disembarked on May 1 in the face of rain, howling winds, and steep, dark, and menacing hills.

Jenny Robin Jones asserts that these new arrivals had escaped "the iron ceiling that class and poverty" in England imposed, and that they could look forward to constructing a new city and a new society.

Perhaps so, but if by some chance they could look back from a vantage point 170 years in the future how might they really feel?

Are the results worthy of their dreams and hopes?

Terry Hearn is an Otago historian and reviewer.