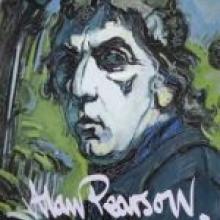 
Denys trussell wrote the definitive account of the life of the Liverpool-born New Zealand artist Alan Pearson, Alan Pearson: His Life and Art (1991) and placed Pearson's work in the context of expressionism generally and in the contemporary art scene.

You couldn't fairly say Pearson is a marginal artist simply because almost all of his work has been figurative and thus easily acceptable by those for whom the wilder corners of modern art are anathema: he is without a doubt one of our most significant artists, a portraitist without peer.

Pearson was a Ten Pound Pom, originally emigrating to Australia to work as a locomotive fireman, arriving here in 1954 and graduating from Ilam in, I think, 1959. At that time I was also living in Christchurch and recall the impact of the student art scene around 1957-60 as being especially vivid and vigorous.

Pearson was at its centre, and a lively figure at the infamous 22 Armagh St parties. In the early '60s he was teaching art at Cashmere High School before winning a scholarship that took him to Europe, returning to live in Auckland. By then, towards the late 1960s, he was fully committed to art.

This new book by his wife, Alison Pearson, is far and away the best I have seen this year devoted to a single artist. It concentrates on his portraiture but includes a few figure studies, and is especially notable for the series of self-portraits Pearson has painted over a long and active life - he is now in his 80s.

It is no exaggeration to say that, collectively, his self-portraits are a remarkable feat; as Rembrandt's self-portraits told the story of that painter and his continuing deep self-analysis, so do Pearson's. They are unmatched in our art.

Fortunately, the text of the book includes Rodney Wilson's essay on Pearson's self-portraits which accompanied the retrospective exhibition Wilson curated, I think in the 1970s, when he was director of the Robert McDougall Gallery. Other written contributions to the book add to the flavour of immediacy, and many are recollections of portrait-sitters and friends who witnessed Pearson making paintings.

More recently, approaching blindness has limited his output and he has lived in Queensland for the past decade or so, a consequence of bouts of serious ill-health and - as Alison Pearson writes - exhaustion "battling a curatorial cohort in the art gallery world whose views were anathema to him". Well, we know what she means; one day someone will write about its creative cost over 30 or more years.

The design of the book is generally excellent, and although I have some reservations about the lightness of the text chosen, I'm informed it was selected so that it would not interfere with the visual reception of the images. On that basis, it is a successful choice but you'll need to be in a good light to read it easily. References are provided, and there is an adequate index.

A labour of love, indeed - and a major contribution to our art history.