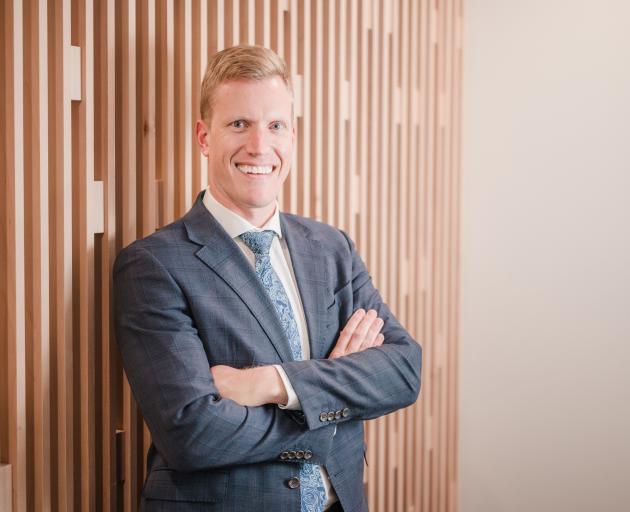 AWS Legal partner Cameron Murphy was recently named one of NZ Lawyer’s 2022 Rising Stars. PHOTO: SUPPLIED
"It gets me out of bed in the morning."

Cameron Murphy was talking about the drive he has for his job as an Invercargill-based lawyer.

The partner at AWS Legal was recently named one of NZ Lawyer’s 2022 Rising Stars alongside multiple other lawyers, under the age of 35, from firms around the country.

A born and bred Southlander, law first piqued Mr Murphy’s interest at secondary school. He had been studying science and quickly realised it was not a career he wanted to pursue.

Mr Murphy shifted to Dunedin to study for a law and economics degree at the University of Otago, which was where he worked as a law clerk with AWS Legal during his summer breaks.

He worked alongside one of the partners Norman Elder, who Mr Murphy described as a "great mentor".

After graduating, he joined the firm as a graduate lawyer in 2008.

In 2015, Mr Murphy, who specialised in property law, was made a partner at the firm.

In his job, he dealt with both residential and commercial properties for southern clients throughout the country, which included handling finance, acquisitions, disposals and subdivisions.

He was exposed to property law early in his career and he believed it fitted well with his economics studies at university.

"I’ve never really had a desire or passion to be in court doing that sort of law."

Mr Murphy’s favourite part of his job was being able to work across the country based in Invercargill.

"Just because we are at thebottom of the country doesn’t stop us from doing pretty significant transactions," he said.

Invercargill, and Southland in general, got a "bad rap" unnecessarily, Mr Murphy said. He believed that was because people did not really understand the region.

Work-life balance was "pretty important" and that could be lost in some of the bigger centres.

Although he lived in Invercargill, Mr Murphy’s job allowed him to work throughout the country and "come home to a region that had a lot of offer" for recreation activities.

"Being in traffic all day is not something that would interest me," he said.

Asked whether he was excited about being named one of this year’s Rising Stars, Mr Murphy would not take all the credit, instead saying it was a team effort.

"I’m not particularly keen on personal recognition," he said.

"I have a great partnership around me and they are the ones that drive me everyday," he said.